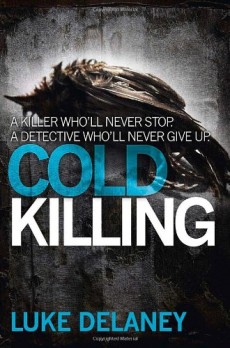 DI Sean Corrigan is convinced that he’s got a serial killer on his hands, but as there is no apparent link between the crimes, he’s got an uphill struggle to convince anyone else of his theory.

This is a book that I almost didn’t persevere with. I picked it up a couple of time and put it down again, reading several other books in between, leaving it languishing on my bedroom floor for several months, but something about COLD KILLING drew me back for a third time, and on that occasion, I romped through it in two sittings, totally unable to understand why I’d almost given up on previous occasions.

DI Sean Corrigan is a man who finds it all too easy to get into the mind of a killer. A childhood founded on abuse makes it possible for him to understand the darker side of human nature as he struggles against his own demons, trying hard not to become part of a cycle where the abused goes on to become the abuser. He has a wife and two daughters now and can’t afford to allow himself to go down that route. Whilst it’s almost obligatory in crime fiction for the protagonist to have a tortured past of one sort of another, Luke Delaney manages to avoid falling into the twin pits of cliché and stereotype, no mean feat when it comes to the serial killer genre.

When Corrigan starts to make a connection between a series of seemingly unconnected murders, he knows he’ll have an uphill struggle to convince anyone else that the same person is responsible, but that doesn’t stop him going all out to prove the seemingly unproveable. Chapters from the point of view of the killer alternate with third person narratives, providing insights into the minds of both the killer and Corrigan, as well as adding a third strand to the story in a way that later gives the lie to any assumptions that are likely to have been made. It’s a mistake to underestimate this book, as I discovered.

Luke Delaney is, we’re told, a pseudonym for a former Murder Squad detective. After the outing of JK Rowling as Robert Galbraith, said to have been a former soldier, it’s hard to know how much store to set by such information, but in this case, COLD KILLING does have a suitably authentic feel to it, without the procedural details being overly laboured.

The book will appeal to everyone who likes their stories to have the ring of truth, and the idea of a killer who changes his modus operandi the way other people change their socks is a suitably chilling idea. This is a competent and entertaining debut that is billed as the start of a new series. DI Sean Corrigan is a name to watch out for.