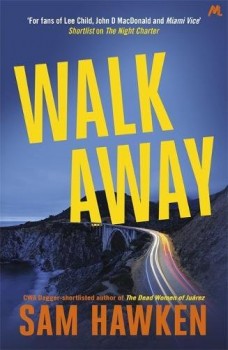 Camaro answers her sister’s cry for help, not knowing that it will end in murder.

Camaro sees her sister’s cryptic message in the newspaper. Annabel Espinoza, AKA Michelle Amado, cannot take much more of Jake Collier’s domination and demands for money. Not long now. Camaro answers Annabel’s cry for help and will soon be here to sort him out. Within hours, Camaro lands in California and takes a taxi to her sister’s home.

Lukas Collier, relaxing in a motel room with a prostitute, responds in the only way he knows how when bounty hunter Stanley Yates crashes through his door – he shoots him dead. Keith Way and Piper Hannon of the US Marshals Service, Virginia arrive on the scene too late. Lukas has disappeared. Soon Jeremy Yates, the victim’s father, will learn about the demise of his only son.

Jake Collier doesn’t get Camaro’s not-so-subtle hint; instead of getting out of Michelle’s life, he comes back, threatening her with all kinds of bad. In self-defence, Michelle shoots Jake dead. When Lukas learns of his brother’s murder, his need for revenge almost outweighs his need for the money Jake had been collecting. But in the multi-faceted manhunt, who will get to who first?

Walk Away, written in the third person omniscient point of view, devotes each chapter to one of the several main characters, although the focus is more on Camaro, the protagonist. The plot is fairly standard, and is focused on action with virtually no mystery. That said, there are secrets in Camaro and Michelle’s lives. Annoyingly, these are referred to often yet never resolved. I hope these glaring loose ends are because this is the second book in a series, not because of a lack of attention to detail. If they have already been explained in the first book, they should only be kept secret from the other characters, not the reader.

Camaro, the protagonist, is a clichéd character; the hard-nosed, blood-thirsty ex-marine. Although the reader sees her in action, her introspections are minimal, and this, combined with her unimaginative and convenient background, leaves her flat on the page. I found her difficult to get to know, and even more so to like and root for. Clearly, she is America’s answer to Stieg Larsson’s Lisbeth Salander of the Millennium series, but she is a shadow of Lisbeth, without depth. The other main characters are stereotypes and equally lifeless.

Sam Hawken’s voice is curious. His choice of vocabulary and sometimes poetic phrases sit in sharp juxtaposition to the characters and action. At one point I even questioned if the book had been translated, or at least if I was reading the writing of an author with the influences of a second language. Unfortunately, this aspect rattled the flow of what should have been a fast-paced story. And unnecessary detail slowed the pacing further still. Being shown, step by step, someone preparing a meal does not draw me in. Neither does the minutiae of someone get dressed.

Walk Away is a fast read, but one in which I didn’t feel absorbed, or even as if I had been taken on a journey. The protagonist does not evolve and there is so much time spent away from her in the company of too many other crime-fighters that I sometimes wondered who the story was about. That said, Walk Away has a straight plot with plenty of blood, guts and action, and in that respect does not disappoint.