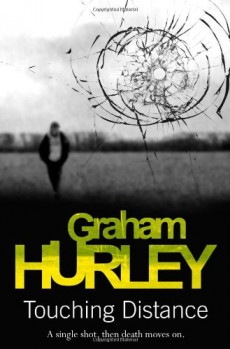 DS Jimmy Suttle's wife has left him and gone back to Portsmouth. So he throws himself into a high-profile murder enquiry which bears all the hallmarks of a professional hit.

If you've stuck with Graham Hurley for the long ride, you'll know that his Portsmouth series  came to an end in pretty dramatic style, and that DS Jimmy Suttle high-tailed it off to the wilds of Devon for a new start. Except, his reporter wife Lizzie wasn't so enamoured of all the greenery and bracing air.

So Touching Distance starts with Jimmy focused on his work and Lizzie back in Pompey with their baby daughter. He's immediately caught up in a high-profile murder enquiry; a man is shot through the head on a lonely moorland road. Two other killings follow swiftly, all seemingly motiveless and apparently the work of professional hitmen. She, meanwhile, has an idea for a hard-hitting newspaper feature that will make her name.

Hurley marshals his plot well, as the action bounces between Devon and Hampshire. As with Peter James, you get the feeling he's bothered to research how a police enquiry actually works. With both writers, though, you occasionally feel they get too caught up in the procedure at the expense of characterisation. And that was so with the earlier books as well – I bet I wasn't the only person to prefer Winter the rogue cop to the rather dull and strait-laced Faraday.

Neither Western Approaches, the first book in this spin-off series, nor Touching Distance does much to provide the cast of cops with much colour, although Suttle's new sidekick DC Luke Golding looks like he has possibilities. Lizzie's side of things doesn't fare much better, although meeja types will no doubt recognise her rapacious fellow reporter Gill!

Which reminds me … I am roundly cursing Hurley for killing off my new favourite character – one who showed some fire and energy. Although he might want to mug up on how the AIDS virus is transmitted.

Touching Distance is a good read – it flows well and there's a suitably nail-nibbling finale. Hurley also takes a sharp and topical look at the military and the UK's present wars. I'm not sure that the resolution isn't too pat, but it's a tense journey to get there.