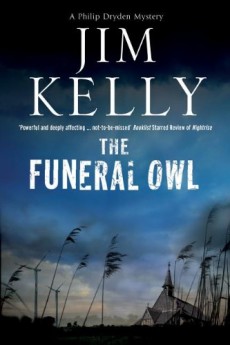 Philip Dryden is now editor of The Crow newspaper – and finds himself hurtling around the Fens covering murders, lethal alcohol, the disappearance of a teenager and the theft of metal which has dangerous consequences.

If Jim Kelly ever gives up writing, he might want to join the circus – this is a man who can juggle plot threads seemingly effortlessly! And his journalist hero Philip Dryden is canny enough not to take his eye off the ball in a patch which seemingly boasts as many murders as Midsomer!

This is a series I've adored from the start. Kelly put it on the back burner for a while for a second series with a police hero, which never hooked me. I do admit to a soft spot for books with heroic hacks in, and Dryden's life on the Crow oozes authenticity. One of his first stories there was an escaped rattlesnake. Mine on a small rural newspaper was a python, who lived in someone's bath, needing a home!

Dryden, a former Fleet Street man who moved east to be near his wife who was in a coma for several years after a road accident, is now editor of the Crow. It's a busy news patch – in The Funeral Owl, a man is found dead hanging from a church cross, an old murder in a farmhouse resurfaces, someone is manufacturing lethal vodka, a young man has disappeared, there's an explosion in a field of wind turbines, and someone is stealing metal across the area, with dangerous consequences.

Where the books score highly is on Kelly's amazing eye for detail and his deadpan humour. There's an off-beat nature to them (trainee reporter Vee is probably the oldest in the country, and Dryden is ferried around by eccentric taxi driver Humph in a Ford Capri that's seen better days) but they never topple into absurdity. The smells and the sounds of this remote part of the UK are incredibly vivid – the fen blow (a soil storm), the goods trains rumbling past and the slight effervescence of the lethal scrumpy where brewers have guessed the alcoholic content all stuck in my mind.

Kelly's humour is as dry as the Fens in summer. Humph is now learning Albanian to add to his list of languages he'll only ever speak once, and he's also hooked on I Spy books. This is a man whose daily exercise is three circuits of his car, and he uses binoculars to spot trees – Dryden assures him that they won't run away!

The Funeral Owl moves the series along neatly, with Humph facing some family problems with his teenage daughter. Dryden, meanwhile, is back living back on his boat – now with a narrowboat moored alongside to accommodate his wife and son! And he has plans for The Crow, including district editions – hence him always being at the centre of the action.

Kelly has a rather laissez faire attitude to point of view, with a touch too much drifting between characters for my liking. But I will forgive a writer almost anything when their descriptive powers are so strong and their storytelling so adept. If you haven't discovered this series yet, you have a real treat in store.