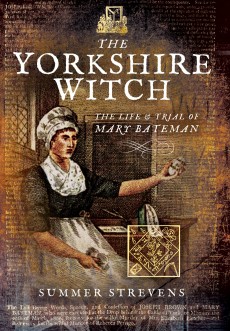 The Yorkshire Witch: The Life and Trial of Mary Bateman

In 1809, a crowd of thousands turned up to witness the final moments of the woman dubbed ‘the Yorkshire Witch’ on the New Drop gallows at York. Mary Bateman was a thief, abortionist, con artist and murderer who preyed on the poor, the desperate and the gullible. Though she was convicted of a single murder, a reassessment of her crimes and the fates of her victims suggests she was in fact a serial killer.

Mary’s career of crime started early: at five she stole a pair of fine leather shoes and hid them, later claiming she found them, and was already known as a liar. She went into service as a maid, but was sacked from position after position for theft, narrowly avoiding prosecution. Later she claimed to be a wise woman, skilled in herbal medicine, and used her talents to procure abortions.

Then Mary hit on a formula she was to use time and time again. Preying on the superstitious, she persuaded them firstly that there was a disaster of some sort lurking in their near futures, and that she could avert it through the use of charms, but this reassurance came at a cost. Once someone was under her spell, she proceeded to fleece them of everything they owned. Those who doubted Mary’s skill and started asking awkward questions were cold-bloodedly poisoned.

The great strength of this book is its wealth of social history that puts Mary’s life and actions in context. There are details about the lives of servants; housing conditions in the growing industrial centres; the rise in religious fervour and millenarianism; and the prevalence of superstitious beliefs. These help the reader understand how Mary’s victims saw the world and why they were duped by her. There are also interesting accounts of early toxicology; how crimes were prosecuted; the treatment of female convicts; and public executions.

The book ends with a chapter on the dissection of executed felons for medical research. Mary’s body was given to surgeons for dissection, her skin was used to cover books, and her skeleton remained on display in a museum for 200 years. The author questions whether it’s appropriate for the remains of executed criminals to be on display in the 21st century, and what should happen to their remains.  It encourages us to consider whether human remains (no matter how old) should be preserved and displayed, and if so, under what circumstances. This thought-provoking and controversial chapter sets this book apart from true crime accounts that relate only the crime, and engages the reader in contemporary ethical debate.

Written in an accessible style that avoids the sensational, this is a thoughtful and thought-provoking account.