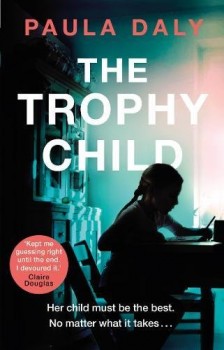 Karen Bloom’s family is cracking under her demands for perfection. Then her daughter Bronte goes missing, and the cracks become gaping chasms.

GP Noel Bloom is finding it increasingly difficult to go home every night to a loveless marriage and a family straining under the rule of his pushy wife, Karen. Verity Bloom, his daughter, is being monitored after trying to strangle her stepmother, especially as they found drugs in her school locker. Ewan, Noel’s stepson, prefers to hide out in his apartment above the garage, smoking weed. Bronte, his younger daughter, is struggling to cope with the burden of school work and extra-curricular activities that her I-want-excellence mother Karen forces on her relentlessly.

Elsewhere, DS Joanne Aspinall has bombed yet again with her latest internet date. But as one door closes, another one opens, even if it is only to a hotel bedroom and a one-night stand with an accountant. Then she gets the call. Bronte Bloom has gone missing. But Karen’s appalling attitude is not the only surprise waiting for Joanne when she arrives at the Bloom home.

A pushy mother, a dysfunctional family and a missing child; what better ingredients for a great ‘ordinary-lives’ crime novel? I was looking forward to reading The Trophy Child. With ever-increasing pressures on our children, this was surely going to be a relevant topic for today’s society.

Written in the third person, with each chapter focusing on one of the main players, Daly develops their characters reasonably, with a good mix of action, dialogue and introspection. She has also achieved that oft missing individuality in each of the characters’ speech that makes the dialogue believable.

It was easy to dislike the overbearing mum – who doesn’t love to hate those bling-bullies dominating the school-gate mum gang - although I think her behaviour was somewhat overstated: it was almost a parody, with her aggressive, almost abusive way with Bronte, and her disdainful indifference to the rest of the family. I found myself understanding the not-so-moral behaviour of the said family, and cheered the older daughter, Verity, for her attempted strangulation of Karen. However, I couldn’t feel much sympathy for Noel, a spineless, womanising alcoholic who’d buried his head so far down, he’d probably got sand on his shoulders. I did like Joanne. She was flawed, but had integrity, and was not about to be put off by Karen, or her position with Noel.

For a family-drama, it would have been more fulfilling to ‘see’ why the mother had no time for her son and step-daughter, rather than just being told. And as the plot hinged on the Karen-Bronte situation, there were remarkably few scenes involving the two characters together. Perhaps that is why there was overcooking of Karen’s behaviour. That said, overall, I did like the balance between good and bad, right and wrong of each of the main characters.

Even though there was mystery, drugs, sibling rivalry, drug and an eventual murder, the pacing is not for those who like fast and furious, although the resolution felt rather rushed. Some of the scenes were superfluous and slowed the story. Finally, although I did find the plot interesting, the foreshadowing was a little obvious and made the twists not particularly surprising.

If it is family-drama that grabs you, The Trophy Child is all about family dynamics and has a good dose of drama. It is an easy, interesting read.