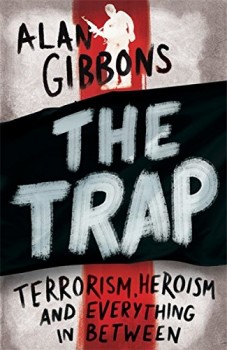 With the help of an undercover agent, the security services are engaged in a desperate race to stop a terror attack.

Amir is a loner at school, keeping himself to himself and not making friends, until the day Nikel starts talking to him and tells him about England Awakes, a bunch of right-wing racist thugs who are targeting Muslins in the area. One man has already been brutally beaten and it is rumoured they are going to attack the local mosque.

Despite playing it cool and declaring he has no intention of getting involved, Amir is finding it increasing hard to continue flying below everyone’s radar, but when he does finally get involved, his family’s secret is revealed and Amir’s actions endanger not only himself but also his sister and his parents.

Majid was studying to be a doctor but his involvement with a man called Bashir turned his eyes away from work and his family towards the dangerous struggle being played out in the Middle East. Majid is young, idealistic and fiery and thinks he can make a difference out there and help to save lives, but it soon becomes clear that to prove his loyalty to Islamic State, he will be expected to take lives as well.

Kate Armstrong works for MI5. She’s experienced at handling agents and the call comes in that a badly injured young man has made his way over the border from Turkey, and might be a likely recruit. Bungee, as he’s codenamed, is willing to turn against his former comrades in ISIS, and might hold the key to preventing a major terror strike on British soil.

The Trap is a frighteningly contemporary young adult thriller that doesn’t shy away from tackling difficult issues head on. The characters are skilfully drawn, and even when dealing with some deeply unpleasant people, Alan Gibbons never stereotypes. The radicalisation of young Muslims is a hot topic in a Britain that appears to be on a frightening slide into xenophobic, but The Trap should be required reading to counteract some of the fear-mongering and outright racism pedalled daily by our media. Some of its truths might be unpalatable, but at least it will shine a light on the other side of the story.

The power struggles within the British security forces are as well depicted as you will find in the pages of any adult spy novel. The desperate attempts to frustrate the terrorists’ intentions mount in intensity to a hard-hitting climax in which it is made abundantly clear that there are no black and white answers, only ever-deepening and depressing shades of grey. And just when you think it’s all over, Gibbons delivers a final punch to the guts.