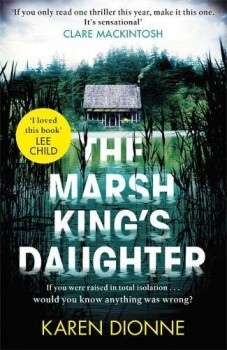 Helena was raised in isolation, schooled in woodcraft and knew no different until the day she and her mother escaped. Now her father has escaped from prison and she needs all her childhood skills to catch him.

At the age of 14, Helena’s mother was snatched from the place she was playing and taken to a remote cottage where she was repeatedly raped by her abductor, a strange, cruel but passionate Native American called Jacob. Two years later she had a daughter, Helena, who is raised in the isolated cottage in the marsh, with no contact at all with the outside world.

Helena adores her father, and despises her mother, until the day she escapes. Jacob is caught and sent to prison. Meanwhile Helena creates a new life for herself, hiding her past, until the day her father escapes, threatening her husband and daughters, and driving Helena to pit her woodcraft skills against her father’s, as she did as a child, in order to catch him.

This novel is very skilfully crafted. It is written with the voice of Helena who switches between stories of her past, graphically described to explain her perceptions as a child, and her current predicament. Incidents of Helena’s childhood are described with the clarity of the eyes of a child, not seeking to excuse her behaviour but clearly trying to understand her motivations and desires.

What is absolutely apparent is the hold her father still has over her as an adult and how her pursuit through the forest brings back all the fear, admiration and competition that was instilled in her by her father. By the end of the novel I felt that I knew and understood Helena but that I could not predict the outcome of her story

The plot is poignant, tragic and inspiring. Karen Dionne has written this book with consummate skill. It is well researched and evocative, cinematic in its scope. I am sure that it will make a tremendous film, drawing on its themes of the wilds of America, the culture of the Native Americans, fear of child abduction and assault, cruelty, murder and suspense.