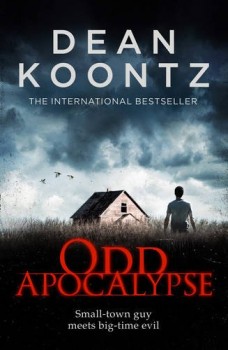 Odd Thomas has found refuge in a crumbling mansion in Santa Barbara, along with his closest friends both living and dead. But the house is a place of terrible secrets, and there is a strange and frightening presence waiting.

Odd Thomas, fry cook and afterlife assistant to various supernatural entities, find himself as a guest in Roseland, a sprawling estate in California built in the 1920s by Hollywood studio boss Constantine Cloyce. Odd is accompanied by Annamaria, a pregnant woman with the ability to calmly charm anyone into doing or giving her whatever she wants.

They are invited by the new owner of the estate, Noah Wolflaw, to stay in the guest tower when they were in need of accommodation and they are joined by their two dogs, hers a golden retriever, his the ghost of a white German shepherd. Once ensconced, Annamaria tells Odd that there is someone on the estate who is in desperate need of his help and that he is in great danger.

No stranger to this, Odd begins to investigate, starting by consulting the house’s chef Shilshom, a man who bakes incredible pastries but always feigns distraction when Odd asks his questions, refusing to give a straight or sensible answer. When he meets their host, Mr Wolflaw, out in the grounds, the man is barely polite and asks him to leave, his insistence turning to confusion at the mention of Annamaria’s name and of course they can stay another night.

But a seasonal change is upon Roseland, the approach of dark skies in the middle of the day that heralds a pack of pig-like humanoid creatures that kill anything that gets in their path. When Odd finally stumbles upon a boy kept prisoner in the house, his mission becomes clear. But to rescue the boy, Odd will need to discover the secret behind the machinery under the mausoleum designed by Tesla himself and to battle the terrible evil intertwined with the history of Roseland.

This is the fifth Odd Thomas novel, although it’s the first I’ve read, and it’s different to Koontz's other books in that it has a more mature tone to the narrative. The plot doesn’t follow the standard structure his more recent novels have; this time the story is cleverly constructed even if the young Odd comes across as much wiser and older than his 20-something years, sounding at times as if he has stepped out of a Dickens novel.

The problem for me is that the story feels more like a Clive Barker construct than a Koontz one, and so I found myself waiting for it to deliver more than it does. The setup has Barker’s daring within it, but Koontz never seems to embrace the horror that the narrative often calls for, preferring to stick instead to something that feels more like a thriller so that this feels throughout like an adult story edited down for a teenage audience. Violence and debauchery are often hinted at but never explicitly depicted (the narrator even ‘deletes’ the expletives uttered by others in his relaying of the story) and for many readers this will be a relief and a draw, but for a horror fan such as myself and someone who revels in the gory details this makes for an unsatisfying and at times protracted read.