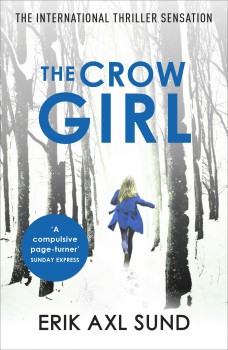 A gruesome discovery leads Detective Superintendent Jeanette Kihlberg into a horrendous world of abuse of trafficked children, and also into a personal and professional relationship with a psychotherapist working with young victims of abuse.

A gruesome discovery of a mummified and castrated boy, found bound with tape in a bin liner, his body full of anaesthetic and horrendous injuries, shocks Detective Superintendent Jeanette Kihlberg. When another victim with similar injuries is found Jeanette is desperate to get the perpetrator, especially as the deaths seem to be the result of a horrendous activity: trafficking children for human dog-fighting.

But the investigation into the deaths of young immigrant unknown boys whom no one misses soon meets opposition from the senior police management, and the Prosecutor, von Kwist, is particularly unhelpful. After a period of time it is eventually shelved. However, Jeanette, despite lack of support from her supervisors and murky dealings, continues with the unofficial work into the murders, with her brilliant faithful sidekick Jens Hurtig.

She’s a third generation police officer, member of a female football team, conscientious but doubting herself, and feels she doesn’t devote enough time to her teenage son Johan and her husband Åke, who is a stay-at-home unfulfilled artist. Her home situation falls apart when Åke meets a gallery owner and soon notices the grass is greener in Poland.

So while trying to manage her private life Jeanette gets in touch with psychotherapist Sofia Zetterlund, who is involved in assessing and treating victims of abuse, including a former child soldier Samuel Bai from Sierra Leone, also found recently killed. Sofia spent three months in that country, and her extensive expertise can potentially assist with the investigation and creating a profile of the serial killer.

But Sofia is struggling with her own traumatic past, with confused memories, unsure about her own identity, her inner turmoil magnified by listening to the recorded interviews with another client, Victoria Bergman. As Victoria’s dramatic desperate story weaves through past and present the fuller picture of abuse and abusers emerge, covering rape, paedophilia, incest, brain-washing and physical torture in different countries. Sofia is confident that the dissociative identity disorder plays a massive role when people try to survive, even it’s impossible to imagine how the enigmatic abusive Crow Girl functions when she holds prisoners.

Professional and personal attraction between Jeanette and Sofia develops and carries the plot through the whole emotional spectrum of the novel with the plethora of characters, each vital to the plot, and layers of deceit at different levels.

Erik Axl Sund is the pseudonym of rockers-turned-authors Jerker Eriksson and Håkan Alexander Sundquist. The Crow Girl was originally published in Sweden as three separate novels: Crow Girl (2010), Hunger Fire (2011) and Pythia’s Instructions (2012). However, a decision was made to have the English edition comprising one huge volume, and I am full of admiration for the magnificent and sensitive translation by the inimitable Neil Smith. And yes, this dark disturbing book is very long.

The pace differs, the tempo shifts and so the narration follows in apparently new directions but the massive story of horrendous sexual, psychological and physical abuse continues to a shocking conclusion. Shocking as there can be no reasonable and logical explanation for the actions of those people. The authors look at the damage caused by the abuse and how people can or not deal with it through vengeance, revenge, or developing personality disorders.

The Crow Girl is dark, disturbing, unpleasant – and totally addictive. It pays homage to the great Scandinavian authors, even including a light moment when a group of tourists in Stockholm follows in the footsteps of Stieg Larsson, author of the Millennium trilogy. Most importantly The Crow Girl puts women at the centre of a story.