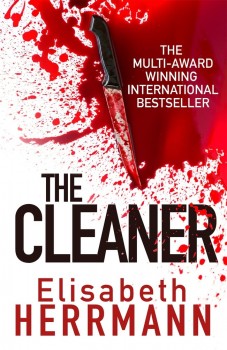 Judith Kepler cleans up crime scenes. Called upon to clean the house of a murdered woman, she is dragged back to her unhappy past.

Judith Kepler leads a solitary and apparently unhappy life working for a commercial cleaning company which specialises in making crime scenes habitable again. One day Judith is cleaning the house of a murdered woman when circumstances draw her back into her past with a desire to resolve her unhappy childhood.

Before the end of the Cold War, a young girl is dropped, at dead of night, into a children’s home, taking the place and name of another girl. The sympathy of one of the workers in the home is the only kind memory that the girl has from that point.

Quirin Kaiserly was an agent in the days of the Stasi. For the last 25 years he has been pursuing a goal, to solve an event from his past. He believes that he has been given significant records from the BND, Germany’s federal intelligence service, which give a full list of all agents from that time. But his source fails to turn up to a television interview, leaving him discredited once more.

The cast of characters expands, all of them with their own histories and links to the shady world of the past. Judith and Quirin end up pursuing the truth together, no easy task with someone as prickly and independent as Judith.

This book is translated, very adeptly, from the original German. The prose is fluent and engaging. The cast of characters is relatively large and their names, particularly at first, are confusingly similar. One adjusts to this as the novel proceeds and become involved in the intertwining plots and narratives.

The best thing about the book is the atmosphere that it evokes. The grey, sinister threatening conditions during the Cold War and the way that this fear lingers into modern times are depicted vividly, by description of place, circumstance and impact on protagonists. The end is good and worth waiting for.