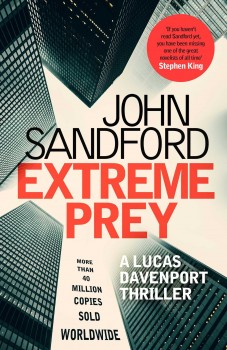 Lucas Davenport is called in when a presidential candidate is threatened with assassination.

Hitherto employed at various crime agencies, Lucas Davenport starts this book unemployed, having become dispirited by bureaucratic obstruction in his last job, and being wealthy enough to walk out. When Henderson, the governor of Minnesota, calls and asks for his assistance, however, Lucas is pleased to help; he is bored and loves the hunt.

The problem concerns Bowden, a presidential candidate currently touring Iowa drumming up support. An odd mother and son team have been around Henderson’s camp suggesting he should be ready if Bowden ‘goes down’. Henderson is sufficiently alarmed to call Davenport, who gets a friend of his to do some highly dodgy hacking into emails received, and is directed to a few left-wing organisations based around Oskaloosa. Davenport is on his way.

The book starts with a portrait of his prey, so we are aware that almost as soon as he arrives Davenport is close to success. But the suspicion or outright hostility of the groups they belong to keep him at bay. His unofficial status limits the cooperation he gets from the local police, and although he gets ever closer it begins to look unlikely that he will be able to stop an assassination attempt at the state fair only a few days away.

After 27 outings all written to a single formula, simultaneously following offenders and Davenport’s investigation in real time, it may be considered surprising that they remain so engaging, but such is the case. It’s like real life, but on the best day you could imagine. Wit and repartee sparkles between Davenport and practically everyone he talks to. The law enforcement community is comprised of quick-thinking and sensible individuals, ready to cooperate. Criminals are bad, but cunning and clever. The vast majority of people are attractive and hardly anyone is morbidly obese.

Davenport himself is remarkably free from the alcoholic gloom which surrounds many modern sleuths: very rich from some computer-related stuff he did in college, happily married, bright kids all doing well, many close friends. Combating crime is a way to stave off ennui, and meet new people with whom he can natter about boats, guns or even clothes. You don’t find many detectives discussing where they get their suits made.

Of course, there is plenty here to make one pause if you stand back. America’s heartland was very pro-Trump; that alone would suggest Davenport’s easy-going attitudes would be a long way out of line with the good folk he comes across. The enthusiasm for guns is something most people on this side of the pond find inexplicable.

But given any amount of scepticism, Sandford is irresistible. The characters on both sides are well-drawn, making them very believable, and Davenport’s dogged pursuit and intelligent use of available resources against worthy foes is always exhilarating. From the evidence here, Sandford shows no sign of losing his punch.