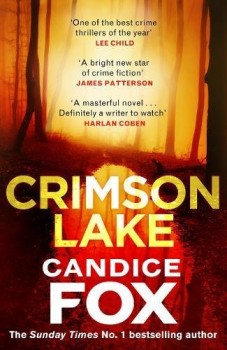 He was in prison for 241 days, she for ten years. But which side of the law are they on?

With the millstone of accusation around his neck, Detective Ted Conkaffey leaves his estranged wife and child behind and tries to rebuild his shattered life in the north of Australia in the crocodile-infested wetlands of Crimson Lake. For now, the locals don’t recognise him as the man who reputedly abducted and raped a young girl.

Amanda Pharrell is still public enemy number one, even years after she murdered her friend and served her ten-year prison sentence. Now she is Crimson Lake’s unlikely PI. Her latest case is that of a missing author, Jake Scully. The police have no leads, and Amanda needs help. Who else would she turn to but an ex-cop who could be re-arrested at any moment?

In a town brimming with hatred and lies, Amanda and Ted are alone. With the cops on their backs, they are vulnerable. As their pasts catch up, their lives are in danger.

It is not often I come across a female author who writes convincingly from a man’s point of view. More often than not, the feminine emotion peeps through, or the character ‘sees’ aspects of his world that most men simply don’t notice. At first, I felt this common fault pulling me out of the story in Crimson Lake. However, I couldn’t help but like Ted despite his self-pity, and his emotionally charged state became more understandable as his backstory unfolded.

Written in the first person past tense and with much introspection, there is an intimacy from the outset. Although there is almost one dream too many, they do serve the purpose of trickling in aspects of Ted’s alleged crime and a reason for his almost PTSD fears. Ted is a well-rounded, utterly flawed character, and it is interesting to sense his subservient nature when faced with the Jack Russell character of Amanda. She is wacky, to say the least. However, I think the author has tried a little too hard to make her an atypical figure. Yes, Amanda is a person who leaps off the page, but I was a long way into the book before I cared about her. At the start, she came across as pretentious.

The plot is interesting, disturbing and gratifyingly twisted in places. Perhaps the foreshadowing is a little heavy-handed, and it didn’t take me long to work out whodunit. But with two incongruous detectives, and a healthy dose of sub-plots, I found Crimson Lake strangely addictive; not a book I wanted to rush, more one to savour.

Candice portrays the milieu well. I soaked up the dark atmosphere and really felt I had journeyed to the crocodile-infested, dingy town without having to swallow too much description. The dialogue is credible, with reasonably distinctive voices. And as the reader comes to know the characters, their actions are believable. The pacing fluctuates somewhat; at times, there is almost too much going on, in places it is slow.

The ending left me with mixed feelings. On the plus side, the author does not subject the reader to a corny, long-drawn out reveal from the criminal. Neither does she entirely resolve the three mysteries, which would have been far too all-lived-happily-ever-after. On the minus side, the ending is rushed, verging on messy. However, I am sure this is because there is another book in this series.

It is a book I didn’t want to like because it is far from perfect, but one which I thoroughly enjoyed. For readers hungry for a multi-layered, visual and senses-driven read, Crimson Lake is a real find.