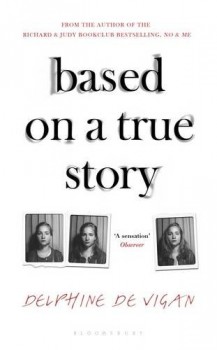 Based on a True Story

Authoress Delphine is signing autographs following the publication of a hit novel when she encounters L for the first time and is totally fascinated by her.

Delphine, who has been a published writer for over a decade, begins by attempting to explain why, after a very well-received novel, she found herself incapable of beginning a new one. Not only that, but the mere thought of putting pen to paper for any reason whatsoever she found repellent, so much so that she didn’t write a letter, a thank you note, a postcard or even a shopping list. For three whole years she didn’t write a single word. She was aware that she was suffering from some sort of psychological illness but had not been able to diagnose it. Now she can. The reason was L.

She had met L at the Paris Book Fair, where she had volunteered to do a book signing. What she had not anticipated was the huge number of people lining up to have their books signed, so popular had her last novel been. Whilst she should have been pleased she found herself feeling dizzy and rather apprehensive. Nevertheless she carried on with the signing until, having finally finished, she found herself being rather abrupt with a latecomer and refusing her signature – something for which she felt profound remorse as soon as she left. She found it impossible to forgive herself for such rudeness and it was in this fragile state that she first met L.

They meet at a party and when L introduces herself (“I know who you are.”) Delphine finds herself very attracted to this beautiful, exquisitely dressed woman who seems to be interested in her and who – more than anyone she has ever met – is so empathetic that she appears to know what Delphine is thinking. Not only that, but she seems to have the gift of saying what the listener wants to hear. Her charm precludes any questions or doubts and Delphine is completely captivated.

As time passes, however, there are hints that the relationship may not be quite as perfect as Delphine imagines. They have discussions about literature and L’s view is
that the novel – the vehicle of creative fiction – has had its day. She maintains that people no longer want to read about characters who don’t actually exist. Reality – particularly through the medium of film – is what matters. In fact, Delphine has learned that L makes her living as a ghost writer of celebrities’ biographies – a fact which, had she thought about it, might have helped to explain L’s preference for ‘reality’. That her new friend might actually be self-interested and jealous never occurs to Delphine who can see only the best of her. All this is part of the seduction procedure which occupies the first third of the novel.

However, that seduction complete, a slightly more chilling situation develops where L tries to prevent Delphine thinking for herself and when she moves in with her, things go from bad to worse. She begins to make all the household decisions and takes over the computer, with dire consequences for any social life Delphine might have had. She even persuades Delphine to allow her to impersonate her at a reading in a school, followed by questions from the pupils. She has already begun to buy the same kind of clothes as Delphine and to dress like her.

Something else Delphine never notices is the fact that the two of them are always alone. Somehow L arranges it that whenever Delphine’s children or her lover Francois are there, she is not – something that Delphine never suspects. Eventually L has insinuated herself into every aspect of Delphine’s life, though the extent to which she has done this only becomes clear in the last pages of the novel.

The other very disturbing feature of Delphine’s life at this time is that she is receiving anonymous letters full of threats and invective.

There are some books in which not much happens and for most of this one that comment might be tempting. Tempting but wrong. When a highly intelligent and creative woman is deliberately reduced to almost total dependence on a ‘friend’ and ceases to be able to function normally, then quite a lot has happened. When a woman is prepared to go to any lengths to take over – almost to steal – another’s life then the very worst has happened.

The tone of the novel changes in the last pages and we are presented with a physical as well as a psychological thriller as the full treachery of L is revealed. Nor do things turn out as the reader expects.