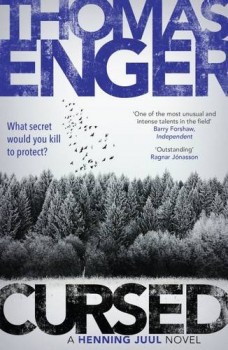 Crime reporter Henning Juul, scarred emotionally and physically, becomes involved in his ex-wife Nora Klemetsen’s search for a missing woman. The investigation leads them into the sinister past of a very wealthy Norwegian family.

Two years later, Juul remains deeply traumatised and the broken yet eternal bond between two unhappy ex-lovers ties them together. The impact of the events provide the tense and suspenseful background in Thomas Enger’s previous books in the series: Burned, Pierced and Scarred.

When Nora is approached by Hugo Refsdal to find his missing wife, she gets pulled deeper into the complicated history and mystery than she had expected. Hedda Hellberg, her university friend, failed to return from a three-week retreat in Italy, a respite trip following her father’s death. Refsdal had already established that the retreat had no record of her stay and it appears that she never left Oslo.

Soon another bit of information comes to life suggesting that Hedda was connected to a death of an old man, shot dead on the first day of the hunting season in a Swedish forest. Nora initially searches through family history and gets in touch with close members to look for clues as to why Hedda might have been lying to everyone.

At the same time Henning, still scared physically and emotionally, decides to take special leave from work to avoid compromising the newspaper’s position and to allow him to pursue his investigation into the arson that had killed Jonas. Without doubt it was connected to his previous work to exonerate Tore Pulli, a reformed extortionist-turned-businessman convicted for a murder he claimed he didn’t commit, and whose life was cut short in prison.

Unwittingly Henning becomes involved in Nora’s search for the missing woman. Each and every question that they ask bring more danger, and open old wounds, and soon they both but separately find themselves in the magnificent beauty of Vestfold county, south of Oslo. It’s a beauty that hides secrets and lies, the shameful past and murky practices of one of Norway’s wealthiest families. But as Nora says to him: “You’ll always be a part of me, even though I might not be a part of you”, and so Henning is prepared to risk absolutely everything to uncover sinister dealings that link this case to his own life.

Multi-layered Cursed, in a flawless translation by Kari Dickson, is truly a powerful, poignant and extraordinary read. Although the narration moves at scary speed, somehow the melancholy lingers and slows it down. If feels as if everything is just about to explode, and eventually it does in the shocking finale of the novel.

For those who are yet unfamiliar with the intense presence of Juul I am sure that you will find elements of Jo Nesbø’s fast-paced plots and brutal violence, touches of Karin Fossum’s thoughtful questions on morality, and Jørn Lier Horst‘s portrayal of decent human beings caught in crime - all delivered in a gripping intriguing plot.

Additionally, Enger provides glimpses into the uneasy history between Sweden and Norway during the second world war, not spoken about but not forgotten either. However, even if the themes and the moods keep Enger firmly within the Norwegian crime fiction landscape, his appeal is so much wider and resonates with the Scandinavian literary spectrum. Enger is an author to be treasured.