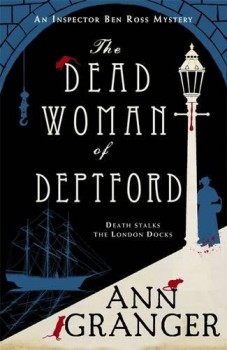 The Dead Woman of Deptford

Scotland Yard Inspector Ben Ross is summoned to the battered body of a moneylender in south London’s old naval dockyard. He soon discovers the last person to see the dead woman alive was a feckless young doctor – who is almost a part of his own family!

The prolific Ann Granger is at it again with her sixth Inspector Ben Ross mystery set in Victorian London and her 30-somethingth overall. Her mixture of historical accuracy, acute and often astringent social comment, neat and ingenious plotting, with her characters always well rounded and often touchingly credible, makes these stories almost a cosy read – but there’s a great deal more to them than that.

Key to their success is the mutually supportive and affectionate relationship between Ross and his wife Lizzie – an intelligent woman with a lively mind and an insatiable curiosity which makes her a key component of all the stories.

They are both outsiders, provincials brought to grimy London by their respective jobs before marriage. Ross is a hard-bitten, often cynical detective, although he can be touched by compassion. His side of the story is told with the single-mindedness of a detective seeking a killer. Elizabeth, almost by default, stumbles into assisting the crime solving. Her voice is so different. She moves in a world far removed from the grime of the South London streets where Ben pursues a killer. Hers is a world of the respectable Victorian middle class – that damning epithet ‘trade’ – where correct dress, behaviour and views are all, with the biggest threat the fear of scandal. It allows her narrative and observations a totally different viewpoint and her gently acerbic asides are as acute and her characters so vivid as to be almost Dickensian in condemnation of the deep divisions and unreality of Victorian society.

A Deptford dockyard worker stumbles on the body of a dead woman. Ben is summoned from Scotland Yard to this filthy and violent suburb, where the closing of the naval yards threatens industry and brawls involving sailors are common. The woman turns out to be a well-known and hardly popular moneylender. The motive appears to be robbery. Meanwhile, Lizzie is trying to suppress a family scandal. Foolish young doctor Edgar Wellings, soon to be an in-law, has gambled so heavily and so badly he has no means of repaying his debts. He has borrowed from the dead woman and appears to have been the last person to see her alive, when by his own admission, they quarrelled.

Lizzie is pressured into visiting the debt collector, but arrives to find her husband investigating the murder, with Wellings as his obvious suspect. The young man has good reason to want her dead, but Ben and Lizzie both know a case like this is rarely as obvious as it appears.

While Ben pursues a search for facts, Lizzie is caught in an enthralling sub-plot involving Wellings’ so proper and so laughably provincial family. It is all set against a Victorian London brought vividly to life. Deptford, with its smog and grim decaying docklands, the foul odours of its streets and the River Thames, its struggling poor and its villains, is neatly contrasted with the drawing rooms, fashions and pretensions of the middle classes.

Granger revels in every tiny detail. Her atmospheric writing and plain and factual description of the period lift her work far above the cosy into that of one of the most evocative of all the Victorian-focused mystery authors.