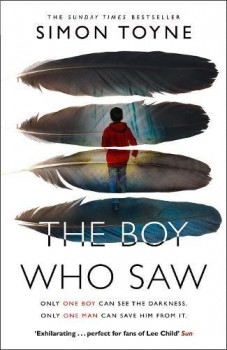 The Boy Who Saw

An old Jewish tailor, a survivor of the Nazi death camps, is tortured and killed. He leaves a cryptic message for his granddaughter who is forced to flee with her young son in the company of the mysterious Solomon Creed who believes he must save the boy in order to save himself.

Who, or what, is Solomon Creed? The albino, his skin and hair strangely white, the lone survivor of a blazing plane wreck, has no memory of his past, no idea of his future, but knows he must follow a destiny he cannot even guess at in a quest for redemption. Is he, as the authorities who seek him over the near-total destruction of an Arizona town, a dangerous high-functioning paranoid schizophrenic with underlying psychoses, or as he believes, a fallen angel on a mission to save certain souls in order to save his own?

He has an unbelievably high IQ, can be totally ruthless and uses his mind to control others. He is a master of life – and death. I compared the plot of his debut to the superb 1985 film Pale Rider, a title from the Book of Revelations’ description of the Four Horsemen of the Apocalypse in which Death rides a pale horse. Both the characters of Clint Eastwood’s Preacher and Creed engender doubt – leaving you to make up your mind in an atmosphere of eerie uncertainty, profound emotional power and more than a touch of sheer evil and terror.

An elderly Jewish tailor is tortured and revoltingly killed in a mountain town in south west France. A message, written in his blood, warns: ‘Finishing what was begun.’ The old man, one of a handful of survivors of a specialist concentration camp, leaves a cryptic message for his granddaughter and her son – one which puts them in danger. He has told his grandson of a strange man who rescued the few survivors and for whom the tailors made a special white suit, which he would one day return to claim.

The boy, Leo, has inherited powers of his own – the ability to ‘see’ and ‘hear’ in colours. He senses the darkness of the ultra-nationalist politics sweeping Europe and those behind it seeking a devastating World War II secret.

When mother and child go on the run, accompanied by the enigmatic Creed, the only one who can save the boy, they find themselves hunted across France, on a journey that takes them to the heart of Europe’s black past.

Simon Toyne takes the reader to places other writers would not dare. The multi-layered world of Solomon Creed, where past and the present collide, is fast-moving, emotionally powerful, completely engaging and masterly suspenseful and will keep you hooked until the very end.

Using the barbarities of the Nazi death camps – and the rising tide of extreme right wing nationalism throughout Europe, but particularly in France – as his background, he spins a warped, but frighteningly believable tale of political infiltration, horror and murder, wrapped in a saga of retribution reminiscent of  St Paul’s teaching in his Letter to the Romans.

The characterisation is brilliant. From the young Jewish mother, grimly determined to both protect her son and uncover her family’s past, through the commandant of police, fighting a dangerous illness and hiding his own secret, to the lowest and worst of the renascent neo-Nazis, all are drawn in stark detail.

But who, or what, is Creed? And who is Magellan, the internationally known psychiatrist who has created a series of carefully constructed lies to explain his subject’s inexplicable and scientifically impossible past?

As Creed walks away, he discovers another mysterious mark on his arm and an indication of where his quest will next lead him. Follow him!