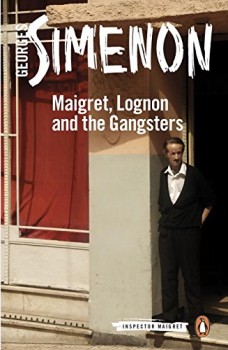 Maigret, Lognon and the Gangsters

Maigret receives a call from the wife of the lugubrious Inspector Lognon to say that her husband has disappeared and that men have broken into her house. He decides that he needs to visit her to see what is happening.

We see Inspector Maigret in a rather different light in this novel. Usually calm and dispassionate, he becomes more and more angry as he tries to find out precisely what American gangsters are doing in Paris. Initially they had broken into the house of Inspector Lognon in his absence and frightened his wife. Lognon is well known in the police fraternity as rather a self-pitying man whose career has not advanced and who blames his ill luck.

Although reported missing by his wife, it isn’t long before Lognon turns up. He describes how he had been on a stakeout at 1am in search of a drug dealer. Suddenly a car had come to a stop not far from him and a body was thrown from it, after which it sped away. Whilst trying to phone the local police station, he noticed another car stop near the body and then drive quickly away. When he went back to check on the body it had disappeared.

Lognon had been able to find out that the car had been hired by an American named Larner. Maigret, using information from a source in the FBI, is able to establish that well-known gangsters from St Louis are operating in Paris.

What makes Maigret begin to question his methods is his conversation with a restaurant owner named Pozzo. Lognon discovers that Larner sometimes eats there and Maigret decides that they should visit the restaurant to make inquiries about him. It turns out to be a New York-style restaurant in the heart of Paris.

It soon becomes obvious that Maigret will get nothing out of Pozzo, who has lived in the United States and is used to much tougher police tactics than Maigret can bring to bear. He is unimpressed by Maigret’s threats and feels that the French police are no danger to him. Maigret begins to see that nothing is to be expected from a man who says that if he is taken in for questioning he will, as an American citizen, get in touch with the US Embassy.

A visit to a similar establishment, the Manhattan Bar, also run by an Italian-American called Luigi, is even less successful. Not only does Maigret fail to gain any useful information, but he also realises that Luigi holds the French police in even greater contempt than Pozzo had. He almost lectures Maigret, indicating that there is no chance that professional American gangsters can be brought to justice by the inefficient French police. Maigret realises that he is being treated as if he were in a kindergarten and begins to see that his tactics will have to change if he is going to be successful.

It is this realisation that spurs him on to take the kind of action that he prefers normally to avoid, but which in this case is clearly necessary. The pace quickens, there is a car chase and the novel ends in a totally unexpected way.

Maigret’s reflections on the difference between the habits of French and American police and the two systems of justice keep the reader interested during the relatively quiet first part of the novel. It appears that sometimes well-tried methods are insufficient and something new is required – even for somebody as clever and experienced as Maigret.