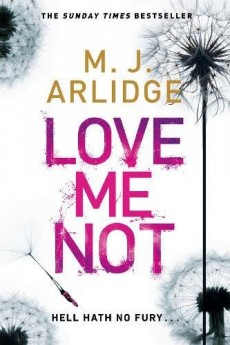 Invisible killers, a legacy of suspicion, and time running out will all help to push DI Helen Grace and those around her beyond the limits.

As probation officer Sonia cruises down the country lanes on her way to work in nearby Southampton, she comes across a motorbike accident. Minutes later, DI Helen Grace puts her foot down on the same stretch of road. She sees a body in the road. But as she gets closer, she realises this is no hit and run. A woman has been gunned down.
Alan Sansom knows trouble when he sees it, and the young couple who’ve just come into his pharmacy are trouble with a capital T. It is one of his last thoughts.
Emilia Garanita, a journalist demoted to writing articles on the neighbourhood watch, can hardly believe her luck when she hears about Sonia’s murder. This is the break she’s been waiting for, the one which will put her back in favour. Or not.
Today more than ever, Helen needs to forget the past, but that’s almost impossible when, other than DS Charlie Brooks, her team is the same one that helped put her behind bars for a crime she didn’t commit. Bitterness and mistrust are getting in the way of catching Alan and Sonia’s killers before they strike again.
Invisible killers, a legacy of suspicion, and time running out will all help to push Helen Grace and those around her beyond the limits. Some won’t be making the return journey.
This is my second taste of the Helen Grace series, and having enjoyed the last one, Hide and Seek, I was eager to see how the shamed-then-vindicated detective would evolve once out of Holloway. Written in the past tense, the short, sharp chapters circulate between Helen Grace, her enemy Emilia Garanita, DS Charlie Brooks, the formerly disloyal DS Joanne Sanderson, the killers, the victims and their families.
Unfortunately, the combination of a large cast and third person point of view did little to draw me in. I would almost say I felt less invested in DI Grace in this story than the one before.
This is readable as part of a series. It is equally a standalone story. Although I often rant about too much backstory, this one is almost guilty of the opposite. A bit more deftly sprinkled reference to Helen’s prior problems with her team, particularly Joanne Sanderson, and with Emilia, would bring the distinct points of view together better for its role as a standalone. And for those readers enjoying it as part of an ongoing series, it would make it clear how little emotional progress Helen has made since her release, particularly as her introspections and behaviour have huge consequences on her entourage.

I remember a sense of Helen Grace running around like a slightly incompetent headless chicken in the last book. I let it pass last time because of the milieu in which she was trying to solve multiple murders. However, it seems that even back in a position of authority, she is the same. Part of me wonders how she ever got to be a DI. Another part of me wonders how she, unlike most detectives in stories these days, doesn’t get a hauling over the coals by her superior for her lack of progress in catching the murderers before the body-count becomes worthy of a cricket score. Perhaps it is because the timespan is short. Perhaps her superior is on leave in the Yorkshire Dales and has no access to a phone.

Each chapter that introduces a potential victim feels contrived, almost formulaic. Of course, I care more about someone’s fate if I have had chance to get to know that person, but the introduce-with -unnecessary-detail-and-slaughter routine doesn’t do it for me. Neither do the systematic one-liners at the end of most chapters, presumably there to keep the reader turning the page.

The plot is predictable, but the identity of the primary killer makes it more intriguing. Unfortunately, even though it is done with more discretion than the pantomime-reveal of many books in this genre, the author spends a great deal of time spoon-feeding the reader with the killer’s backstory and motivations.

The aspect that most undermined my suspension of belief is the voice. Whilst I appreciate this is written in the third point of view, surely not all the characters use the same vocabulary in thoughts. If we are to hear the introspections of young, drugged-up adults, please do not put flowery, Latinate words in their head. It flattens potentially three-dimensional characters and highlights the one thing the reader should not be aware of: the author.

That said, Love Me Not is a fast-paced, graphic but easy read. It certainly promotes feisty women on both sides of the law.