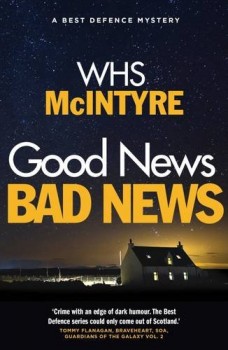 Criminal defence lawyer Robbie Munro has a new crop of clients, including a junior lawyer on a drugs charge and a dying woman with a lottery win seeking an errant husband.

Lawyer Robbie Munro returns with new clients to sustain his Edinburgh practice, which since the departure of his junior partner Joanna to the office of the Procurator Fiscal, now comprises himself and waspish secretary Grace-Mary. In his private life, however, Joanna is very much still around as Robbie’s fiancée, sharing a house with Robbie, his father, brother Malky and five-year-old daughter Tina.

The book begins with Robbie defending Heather, a trainee teacher, from a charge of assault for a slap delivered to a badly-behaving boyfriend. The Sheriff, Brechin, is not persuaded by Robbie’s argument that the prosecution was over-zealous on the part of the authorities and that the case should be dismissed. Conviction would be a critical setback for Heather’s career, and an appeal is lodged.

That night Robbie and Joanna are at a dinner for the legal fraternity when the police arrive to arrest three young female lawyers for possession of cocaine found at their flat. Robbie is asked to represent Antonia, one of the three, who happens to be Brechin’s granddaughter. At a preliminary hearing Robbie insists Antonia should plead not guilty, despite her admission of culpability and the decision of one of her co-defendants to plead guilty. When the charge is subsequently changed to possession with intent to supply, it starts to look as if Antonia may end up in serious trouble.

A more unusual line of work comes from Ellen, a habitual shoplifter who has had a big lottery win, but has little time to spend it: she has been diagnosed with a terminal cancer. At Ellen’s request, Robbie and Joanna fly to Prague to find Ellen’s husband Freddy. Con-man Freddy is hiding from Jason, a tough character who Freddy has swindled out of £150,000, but agrees to return to UK in anticipation of a big inheritance when Ellen succumbs to her illness. Subsequent events, however, show that Ellen has been somewhat economical with the truth.

As in his initial outing Present Tense, Robbie sails very close to the wind and his decisions often seem to align with his own best interests, rather than those of his clients. There is some wit to the dialogue, and many readers will find Robbie a lovable rogue, although not necessarily the sort of chancer you would want representing you in court. Luckily he has Joanna to chivvy him back onto the straight and narrow.

I did enjoy the courtroom scenes, although still fairly brief. Robbie’s home life is invigorated by his family, especially Tina and the succession of pets. The various legal and domestic matters are irretrievably combined and move along at a brisk clip, making this an easy and enjoyable read. Whether the protagonist is a good advertisement for his profession is quite another matter.