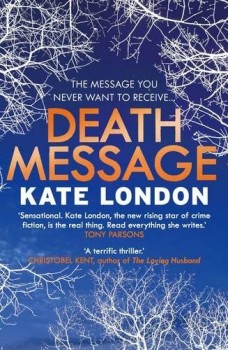 The last time DS Sarah Collins came across DC Lizzie Griffiths, she was investigating her for possible professional misconduct. Now the two women have to find out if they can work together.

DS Sarah Collins, of the Met’s Homicide Command, is investigating the disappearance 27 years ago, of 15-year-old Tania Mills, who left home in 1987, the day after the great storm that ripped across southern England, leaving chaos in its wake. But finding new leads after so long looks to be an almost impossible job, and Collins’ bosses would prefer her to be spending time on more current matters and it’s not long before another problem is competing for her time and attention.

Rookie detective Lizzie Griffiths, who has some past history with Collins, is working in the Domestic Violence Unit. She’s called to a scene of domestic violence, but as is so often the case, the woman involved is reluctant to press charges, even though her partner has injured both her and the family dog and terrified her young daughter. The man, Mark Brannon, is superficially both attractive and charming, but he’s also dangerously controlling and abusive. Griffiths is drawn into Brannon’s web as the violence escalates, threatening the life of both Georgina Teel and her daughter Skye.

This is the second outing for Collins and Griffiths, who first appeared in Kate London’s debut, Post Mortem. At the time, the pair were refreshingly free of the usual truckload of baggage that encumbers most fictional coppers, but that’s not quite so true now. Griffiths in particular is scarred by her experiences in the previous books and has only just emerged from an internal investigation into her conduct. Collins was one of the investigators. The need to get that past history over to a possible new audience has a slight tendency to bog the book down at times and is, to a large extent, not particularly relevant to the current events.

That, coupled with two very disparate main threads and the frequent change of emphasis from Collins to Griffiths and back again made the story a hard-sell for me to start with. Just when I was getting into one thing, I was bounced into a different thread, but I’m glad I persevered. When things do coalesce Death Message finally hit its stride and the narrative exerted a strong pull. The characters are both likeable, something that is by no means a certainly these days, and it’s good to see two very different female protagonists. Collins is quite prepared to go her own way in an investigation, but there’s no conscious effort to style her as a maverick, and although Griffiths has plenty of insecurities, she’s also capable of standing up for herself.

Neither of the two essentially unconnected investigations would have sustained the book by themselves, but once they bedded down together, they became a surprisingly good fit. If ex-Met detective Kate London is to continue with Collins and Griffiths as series characters, it will be interesting to see how the two women develop. There’s some stiff competition around, but the pair can hold their heads up even in more established company. The background details feel authentic – as they should from an author who’s worked in The Job – and the cast of supporting characters is strong, from DCI James Fedden, a man who likes to be in control, to Griffith’s slightly sleazy boyfriend, Inspector Kieran Shaw, a man with a grudge against Collins. Death Message is a good solid police procedural, refreshingly free of stereotypes.