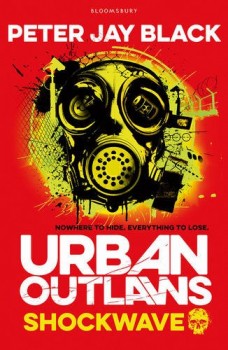 The Urban Outlaws have been infected with a deadly virus and now their arch-enemy Hector Del Sarto is threatening to infect the whole of London – and the rest of the country – as well. He also has the antidote, and the Outlaws need it, fast.

The Urban Outlaws series reaches a climax in Shockwave, the fifth and final book in an engrossing run of teen thrillers, with the Outlaws pitted against arch-enemy Hector Del Sarto as he threatens to unleash a deadly virus on London, a virus that has already infected the five Outlaws.

Jack, Charlie, Obi, Slink and Wren are engaged in a desperate race to save their own lives and the lives of countless other people. They need the antidote to the Medusa virus and they need it fast, but so far, Hector has always managed to stay one step ahead of them. They’ve lost their base deep under the streets of London, destroyed by their enemy in a cataclysmic explosion, and they’re on the run, stripped of the one thing that has always stood them in such good stead – their anonymity.

But even with no resources behind them, the Outlaws are a formidable team. Jack is the thinker, the planner, the one who can always be relied on to find an ingenious way out of a tight spot. Charlie designs and makes the gadgets that the group have so often relied on, and she can turn her hand to adapting pretty much anything. Obi is their surveillance mastermind, Slink is a free-running expert who can scale any building, and Wren, at ten the youngest member of the group, is brave and resourceful.

The Outlaws are up against some formidable opponents. Hector Del Sarto has an entire criminal organisation at his beck and call, armed with both conventional and unconventional weapons, but Jack and Co have little more than their wits to rely on, and they become even more isolated when their friend Noble is captured. He’s the only adult they can rely and with their strength failing by the day, it’s by no means certain that the Outlaws will come through this last adventure.

Peter Jay Black has created a bunch of memorable characters who have deepened as the series has progressed. They have their strengths, and they have their weakness, and there are times when Jack struggles to keep the team together, particularly when hot-headed Slink wants to go off on a frolic of his own. But no matter what happens, the Outlaws care deeply for each other and are quite prepared to face death together, if that’s the way things have to be.

I’ve enjoyed this series all the way through, and I’m sorry to see it come to an end. The kids are a great bunch and their adventures have been fast and fun. If you can, start at the beginning. I guarantee you won’t regret it!