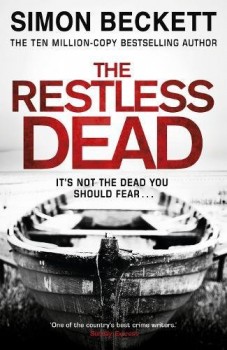 Forensic anthropologist Dr David Hunter is called to give advice on a body washed up on the Essex marshes. The police seem to want an easy resolution to the case of a missing man, but Hunter isn’t convinced by the evidence and wants to delve deeper.

I last encountered forensic anthropologist Dr David Hunter six years ago, in The Calling of the Grave. I was expecting a lot of water to have flowed under this particular bridge since then, so I was surprised to discover that’s not in fact the case, and The Restless Dead immediately follows the last book in the series.

Hunter, who’s spent time in something of a professional wilderness in the aftermath of his last investigation, is pleased to be asked to consult for the Essex police force, and is very happy to prioritise a trip to a remote area of marshland over a trip to the Cotswolds and the prospect of some thinly-disguised match-making from friends.

A body has been washed ashore and the police are hoping Hunter will be able to give them some idea of how long the corpse – now missing both hands and feet – has spent in the water. Hunter, eager to please and equally eager to be thorough, discovers that the police – or at least the higher echelons of the Essex constabulary – would be quite happy to accept that the body is that of Leo Villiers.

Villiers is the son of a prominent local family, who is believed to have killed himself after murdering his lover, Emma Derby, a married woman. But Villiers’ father isn’t keen on a verdict of suicide, and is thoroughly obstreperous when it comes to disclosing his son’s medical records, even if that hinders the identification of the body. He’s happy to have his son’s death written off as an unfortunate shotgun accident.

Hunter isn’t quite so inclined to accept the easy answers, though, and finds himself caught up in a tangled web almost as treacherous as the tidal mudflats of the Essex coast.

I always enjoy books with a strong sense of place and The Restless Dead has that in bucket-loads. Simon Beckett makes excellent use of the creeks and tides of a desolate but strangely beautiful area of coast. Hunter comes over as something of a townie who is out of his depths at times, both literally and metaphorically, as he nearly writes his car off trying to get through a road crossing with the tide already coming in, something that doesn’t go down too well with the local man who has to come to his rescue! There are gruff locals, harassed coppers, and awkward landowners, and even a potential love-interest for Hunter – if he can stop himself putting his foot in his mouth, something that happens with a fair degree of regularity.

The plot is clever and well-constructed. The forensic detail of how corpses react to prolonged exposure to water is as gruesome as it is fascinating and will no doubt go down well with anyone who – like me – enjoys reading anything by Kathy Reichs. An author who knows their stuff and can put it over without resorting to info dumps is always to be treasured. I hope we don’t have to wait another six years for Hunter’s next outing!