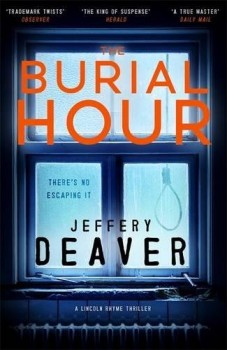 Lincoln Rhyme and Amelia Sachs travel to Italy on the trail of a serial kidnapper who likes to torture his victims in pursuit of some unusual goals.

It’s 20 years since paraplegic criminalist Lincoln Rhyme first appeared in The Bone Collector. He’s as crotchety as ever and is determined to make good use of the improved movement in one arm to lift a whisky glass, despite the disapproval of Thom, his carer. Rhyme is about to marry his partner, Amelia Sachs, and has some unusual ideas of where might constitute a suitable honeymoon venue. Nice to know some things don’t change!

Rhyme is consulted about the kidnapping of a man in broad daylight. The only witness is a nine-year-old girl. Left behind on the pavement is a miniature noose. The kidnapping seems motiveless. The man runs a small business, but is generally unremarkable. The case soon turns critical, though, when a video is uploaded to a popular streaming site showing a live feed of a man balancing precariously on a wooden box whilst hanging from a noose and being slowly strangled. His agonised gasps appear to have been incorporated into a piece of music, and the kidnapper has signed the video The Composer.

It’s tradition in serial killer books for the perpetrator to be given a nickname, and here the perpetrator obliges by providing their own. That way we know they’re a wrong ‘un. Using Rhyme’s own brand of forensic science – the close examination of every minute trace left behind at a crime scene – the police able to save The Composer’s intended victim, but Rhyme is convinced there will be more and, unusually, Rhyme and Sachs end up in Italy on the kidnapper’s trail.

It’s not often that we see Lincoln Rhyme out of his home city, but in The Burial Hour he gets to acquire a taste for grappa as well and pursue the investigation alongside the Italian police and their state prosecutor, Dante Spiro, a man almost as abrasive and difficult to work with as Rhyme himself. But Deaver isn’t one for too much stereotyping, and the development of Spiro as a character is one of the book’s great strengths. There’s also the immensely likeable Ercole Benelli, a Forestry cop on the trail of a truffle counterfeiter who gets involved by accident with the hunt for The Composer and brings some unexpected strengths as an investigator to the party.

As ever with a Lincoln Rhyme book, Deaver gets to show off his immaculate plotting and attention to detail, as well as his skills at building believable characters and weaving them into a complex, satisfying story of the hunt for a man with obscure motives who appears to be targeting the refugees flooding into Italy from north Africa and the Middle East.

The evidence charts provide a handy visual checklist of how the story is progressing, and enable anyone who likes to have a shot at crime-solving to keep up with Rhyme. But the skill lies in joining the dots, and that’s something Deaver excels at as The Burial Hour seems to open some new horizons for Rhyme.