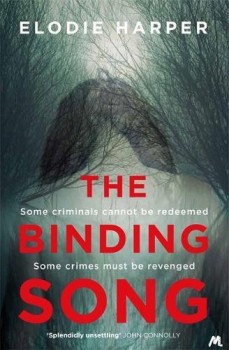 Newly-appointed lead psychologist Janet Palmer is faced with a spate of suicides amongst the prisoners and a worrying climate of secrecy amongst the staff at Halvergate Prison.

Dr Janet Palmer is the newly-appointed lead psychologist at Halvergate Prison, a bleak institution on the site of an old RAF base in the remote Norfolk fens. She’s excited about her new job and the promotion she’s gained, but her boyfriend thinks she’s making a terrible mistake leaving London. Janet disagrees, and even her drab, faintly damp and distinctly unwelcoming rented house doesn’t dampen her enthusiasm.

But she soon learns that there’s more to Halvergate than meets the eye. Her new colleagues are a secretive bunch, and no one seems keen to enlighten her about why her predecessor Dr John Helkin left so abruptly. Helkin’s presence is everywhere, from his shirts and cufflinks left behind in the rented house he occupied before her, to the shadow of his work with the prison’s most vulnerable prisoners, the sex offenders despised by both inmates and staff alike. Helkin’s notes are at best rudimentary and at worst utterly unhelpful, and Janet finds it hard to get to grips with what he had been doing, although her suspicions start to grow that his approach might not have been entirely ethical.

Halvergate has been beset by a spate of suicides and all its obnoxious governor and his equally dire deputy seem to care about is getting through the prison ombudsman’s visit and meeting their key performance indicators. Janet is cut from very different cloth and seems to genuinely want to help the men in her care, although some of them, in particular the good-looking, superficially charming Michael Donovan, are not easy to deal with.

Donovan is serving a sentence for the brutal rape of his girlfriend, and seems to exhibit no remorse whatsoever for his crime. He’s a disruptive element in group therapy sessions, but is also the only person in the prison who’s willing to tell Janet anything about her predecessor, but the question of how far he can be trusted is a troublesome one for Janet, and the more she looks below the surface of Halvergate’s problems, the muddier the waters become.

The men who took their own lives seem to have been obsessed by the idea that a vengeful demon in the guise of a white lady with pebble-black eyes had been pursuing them and after a while, Janet begins to wonder if some sort of group psychosis is at work, but then she starts to have troubling dreams …

Elodie Harper’s debut is skilfully crafted and spine-chilling. Suspense builds gradually through the use of some classic horror tropes such as faces at windows and in mirrors, but in Harper’s hands even such time-honoured clichés still caused the hairs on the back of my neck to stand up. Janet Palmer has her own personal demons as well. Her beloved twin sister has died and Janet can’t forgive herself for not taking her last phone call. Janet’s relationship with her boyfriend is heading for the rocks as she doesn’t want to follow him to a new life in the States, and she’s struggling against the combined tide of hostility and secrecy from her new colleagues.

Harper has a light but effective touch with the horror elements and manages to maintain forward momentum in the story whilst still drip-feeding information, which is a difficult trick to pull off. There are some really creepy moments in The Binding Song, and it’s going to be a long time before I’m comfortable looking in the rear-view mirror when I’m alone in a car at night, so thanks for that! I’m not too happy with bathroom mirrors, either …