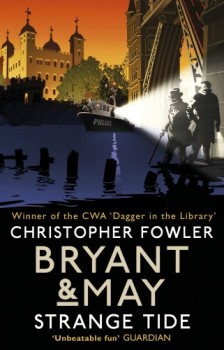 Bryant and May: Strange Tide

Bryant and May of the Peculiar Crimes Unit investigate when the body of a woman is found chained to a post in the River Thames.

Some readers may have avoided previous Bryant and May investigations because of the jokey names and a lack of interest in comedy crime capers. However, in the spirit of horizon broadening and because they are such a well-established police detective duo (this is the 13th book to feature them) Strange Tide is a good place to start getting to know them. Also Christopher Fowler has award-winning writing credentials to justify attention.

The first thing to say, although fans will already know this, is that it is wrong to think that this is a comic novel. Fowler is too clever a storyteller to write such a thing and the series is so successful it has to be taken seriously. You may be concerned that the crime, the victim and the investigation will be treated with appropriate gravitas. You may ask if the humour contributes to or detracts from the police enquiries. You may wonder if the duo has different, yet complementary approaches to successfully solving the mystery. Have no fears.

The banter between the Peculiar Crimes Unit team is established from the start and shows that they are both clever and funny. In this story they also have to deal with the declining health of Arthur Bryant. He is supposedly off the case, but it is not easy to try to stop him getting involved. His unorthodox approach to crime solving, his eccentric thinking and imaginative analysis of information are heightened by his illness. With the future of the unit under threat the team, especially his partner John May, need to keep him under control. The strength of the novel lies in the relationship between the two men, which is at times quite touching, and the sympathetic support and concern of their colleagues.

The mysterious death plot at the centre of Strange Tide is convoluted but it is none the worse for that and helps make room for the humour. We are offered an intriguing and atmospheric investigation peppered with London history and myths and tales about the River Thames over the years. With Bryant becoming infatuated with the mystical nature of the river and May doing the leg-work the mystery starts to take on unusual lines of enquiry. The usually efficient May makes a mistake under pressure that could threaten the solving of the crime and put the PCU under even closer scrutiny.

The plot provides an interesting insight into how, when a close partnership is forced to work separately, both halves struggle to remain effective without the other. There is also an emphasis on the importance of team-working in crime solving and the need for clear or at least respected leadership.

Strange Tide is a story of today and Christopher Fowler uses the humour playfully and carefully. He illustrates that there is no substitute for imagination, experience and solid research, be they applied to both successful police work and engaging novel writing.