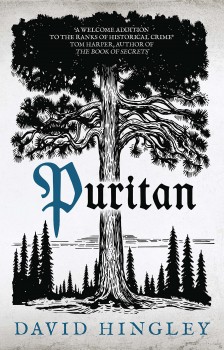 Mercia Blakewood hopes her search for Charles II’s missing paintings, which has taken her to America, has gained enough leverage to reclaim her family home. But when a new friend is murdered, she will not leave until the killer is found.

Mercia Blakewood, daughter of a Cromwellian officer who was executed as a traitor after the Restoration, has been brought to America by her search for missing royal works of art which she hopes will win the favour of Charles II in her bid to regain her family home.

After the dramatic events in New Amsterdam, now renamed New York by the English invaders, which climaxed Birthright, the first book in this fascinating series, the widowed Marcia, with her son, friend and would-be husband Nathan and servant Nicholas decide to see more of this New World.

A visit to John Winthrop, first governor of the Massachusetts Bay Colony, and chief figure among the Puritan founders of New England, leads them on to the isolated settlement of Meltwater on the very borders of English influence. They arrive in a township wracked by fear and suspicion. The arrival of James, Duke of York, King Charles’ Catholic brother with a sizeable army, has made the Puritan settlers worry he plans not only to create his own realm, but also return them to the direct rule of a system they fled England to escape.

Also there is the unexplained drowning of their pastor, the community leader, and rising tension with the local Indian tribe, whose ‘pow-wow’ – the influential medicine man and chief negotiator – has been killed, apparently by a settler. Scraps of paper, marked with a strange code, have been found on both their bodies.

Despite a mixed reception, Mercia soon makes a friend, the lively and outgoing Clemency Carter, the community’s own medicine woman who dispenses her own remedies and those of the scientist and alchemist Governor Winthop, but is regarded by more extreme Puritans as a witch. This burgeoning friendship is cut short when Clemency is found hanged and the settlement’s pompous magistrate immediately tries to write off her death as suicide.

When another coded note is found with her body, Mercia is convinced she was murdered and swears she will not leave until the killer is brought to justice. More killings follow and she and her companions are plunged into a web of ambition, religious fanaticism and racial tension – all set against the virgin forests of New England.

David Hingley again blends fact and fiction to create a masterful story and once more his research is exhaustive. The minor characters all fit time and place perfectly – with the local constable, Godsgift Brown, a prime example of the misunderstanding and intolerance which led to several revolts – including the four-year Pequot War which took place 25 years before this story is set and led to the eradication of a whole tribe.

Readers brought up on Hollywood’s depiction of the American Indian woman may question the revenge-driven female warrior Sooleawa. But women played a major role in native society and there are many examples of them being involved in conflict, with some, such as the Crow, Pine Leaf, the Blackfoot, Running Eagle Brown Weasel Woman, or the Cheyenne, Buffalo Calf Road, highly-regarded battle leaders.

This is an intelligently plotted and compelling follow-up to Birthright, with enough loose ends left to carry the reader into the next instalment of Mercia’s quest. Hingley boasts believable plots set in one of the most turbulent times in British history; a sparky, intelligent and determined heroine and a solid historical base.