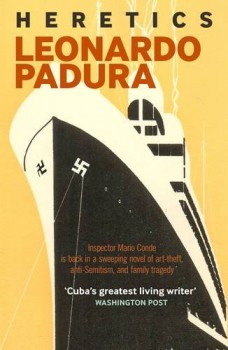 Retired Cuban detective Mario Conde helps to trace the chain of possession of a Rembrandt portrait that was stolen and disappeared for 70 years.

Retired Cuban detective Mario Conde’s help is sought by New York painter Elias Kaminsky, whose father Daniel was at Havana docks in 1939 to meet his parents and sister, arriving on the liner Saint Louis. The primarily Jewish passengers were infamously refused landing rights and the boat sailed back to Europe. In a bid to land, Daniel’s father bartered a small Rembrandt portrait, but the recipient never delivered on his side of the bargain.

In 2007, the Rembrandt has shown up in London, and Elias is seeking to uncover the path of the stolen artwork in the intervening period to substantiate his claim to its return. A complication is that Mejias, the customs official who is thought initially to have had the painting, was murdered in 1958, shortly before Daniel left Cuba for the US. Who killed Mejias is not known, although several people believe it was Daniel himself. Supposedly the painting was stolen at that time, and has not been seen since.

With the case seemingly stalled, the book moves focus to Amsterdam, 1645. A young Jew, Elias Kaminsky, is impelled to seek lessons from Rembrandt van Rijn, despite a prohibition by his tribe on human representations. He attains a high level of skill and his master’s regard, but is denounced by his orthodox fanatic brother and condemned as a heretic, ending up in Poland during a terrible time for the Jews.

The book returns to Cuba, where another enquiry helps Conde achieve a breakthrough. Troubled 18-year-old Judy has disappeared, and her friend Yadine implores Conde to help find her. The girls are emos and part of a group which embrace indifference and despair in reaction to the loss of freedom they experience. Eventually Conde is brought into contact with a family with artwork which looks familiar, and is able to help Elias recover the painting that is so important to him.

The book creates a believable and interesting picture of two very different societies. In Cuba the communist dream has evaporated and scepticism about politics exceeds that of even Europe. The young espouse crank philosophies in the face of a bleak future, and adults scratch about for a bare living, although an essential love of life, friends and partying comes through. Mid-17th century Amsterdam could not be more different, you would think, but many of the same issues emerge.

At 550 pages, this is a book that calls for some commitment, especially as the author favours long sentences with plenty of subordinate clauses, and the translation is sometimes a little clunky. But there is no doubt that this is a substantial piece of work, blending into a detective story the author’s investigation of the nature of belief and heresy, the necessity for individual freedom and the importance of friendships.