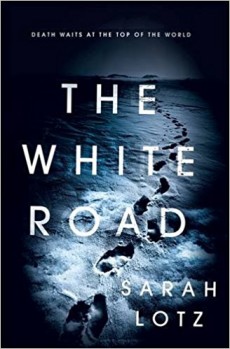 Simon Newman has a bad reputation to live down. When he made a clandestine trip into a Welsh cave with another man, only Simon came out alive. Now he intends to make an attempt on Everest, the world’s highest mountain.

Simon Newman would be the first to admit that a bad fall eight years ago, climbing in Wales, gave his confidence, as well as his body, a bad knock. But that doesn’t stop him from planning a clandestine trip into a Welsh cave that has been closed since the deaths of three cavers there in a flash flood some years previously. The bodies of the men are still in the cave, and Simon wants to capture their remains on film, in an attempt to revive the flagging fortunes of the website, journeytothedarkside.com, he runs with his friend Thierry.

Despite Cwm Pot’s dubious reputation, Simon hooks up with Ed, a man he met on a cavers’ internet forum. Ed agrees to guide Simon through the cave and they meet in a remote location. Although he has some misgivings, Simon hands over the money he’s agreed to pay for the trip and puts on his borrowed caving gear. It’s his first trip underground, but Simon thinks his climbing experience will stand him in good stead.

The trip through Cwm Pot is a punishing mix of climbs, crawls and squeezes, and history seems likely to repeat itself when Simon and Ed get trapped by rapidly rising water and have to sit out the flood in the same chamber that houses the bodies of the three cavers who died down there. Only Simon survives the trip.

Thierry edits the film Simon took on his webcam, and puts the results up on their website where it instantly goes viral, catapulting journeytothedarkside.com into the limelight, where the footage attracts as much opprobrium as it does interest. As the hits mount, Simon comes under pressure to pull another stunt to keep up their ratings and ends up on a guided expedition to Everest. While ostensibly there to reach the top of the world, Simon’s real aim is to get as much footage of the numerous dead climbers on the mountain as he can.

I always jump on any novels which feature caving to add to my collection and The White Road has earned itself a permanent place on that shelf. The descriptions will ring true to anyone who has ventured underground. Cavers will spot echoes of the Mossdale tragedy and will quickly work out that Cwm Pot is an amalgamation of features like The Letterbox in Ogof Ffynnon Dhu, the piped entrance to Cwm Dwr and the squeezes in the Daren Cilau long crawl.

As a caver, I enjoyed the underground descriptions and felt they rang true. For non-cavers, the books will almost certainly reinforce the commonly-held view that we are all as mad as a box of frogs for ever venturing out of sight of daylight! The occasional appearance of the word ‘spelunker’ instead of caver, as well as the use of the plural ‘caves’ for what is clearly a single cave made me think Sarah Lotz, who writes under various pseudonyms, is of US rather than UK origin.

I’m not qualified to comment on the details of Simon’s attempt on Everest, but the chilling descriptions of the perils of high-altitude climbing invoked in me the same reaction as other people will no doubt have to the underground sequences. Hell will freeze over before I have any inclination to get that far up any mountain!

Simon’s story is intertwined with that of expert climber Juliet, who is attempting to be the first woman to climb Everest unaided. Her diary brings her journey vividly to life and exposes her hopes and fears as she struggles against the elements and the limitations of her own body on a mountain that has already claimed over 280 lives. The list of deaths makes grim reading, as do the descriptions of the bodies that still lie on or close to the main climbing routes, some of which have become landmarks for those following in their footsteps.

The book is about more than simply physical challenges, though. Both Juliet and Simon experience what has become known as Third Man Syndrome – the strong feeling that someone else is accompanying them on the climb. In most reports, mainly from climbers and arctic explorers, the unseen presence is a benevolent one but for Juliet, it’s more unnerving as she sees a man with his face concealed by old-style breathing gear, and for Simon, it’s even worse, as he sees Ed, the man who died on his ill-fated trip into Cwm Pot. Whether Ed is trying to help or hinder him, Simon doesn’t know.

Simon’s deteriorating mental health and obvious post-traumatic shock syndrome are as sharply observed as Sarah Lotz’s descriptions of Cwm Pot and Everest. The White Road is a fascinating and frightening study of grief and obsession and the lengths to which men and women will go in search of their personal goals.