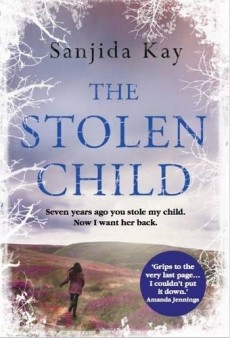 Evie is the stolen child, the little girl artist Zoe Morley and her husband Ollie adopted. The little girl whose father wants her back.

Zoe Morley, respected London artist, and her husband Ollie are thrown into a spin when their daughter arrives early. For a long time, it is touch and go. But then it would be; Evie’s birth mother is a drug addict.

Seven years later, now living in Yorkshire, Zoe has a two-year old, totally unexpected child; Ben. Her family is complete. Zoe should be happy. But Ollie’s seeming indifference, the demands of motherhood and her impending exhibition all combine to lead Zoe off course. And while she is busy making bad choices, Evie’s birth father is closing in. He wants his daughter back. He will manipulate his child with presents, and stop at nothing to get her.

Sanjida Kay’s straightforward writing style, along with the first-person point of view, written in the present tense, went a long way to sucking me in within the first few pages. Her attention to senses writing helps build a clear, atmospheric picture of the backdrop, whether inside a hospital, a café or out on the desolate and wild moors around Ilkley.

The main character, Zoe, is well developed through believable actions and introspections. She is flawed and makes mistakes. She has dark thoughts and is a worrier. She is a real, three-dimensional person, and not one that everyone will like. However, even if her behaviour annoys, which it did me with her sometimes stubborn assumptions, her raw emotions make the reader care. Ollie is believable too, though by comparison, a little less developed than his wife. He too is unlikeable in places. I am sure many readers will not join the Ollie Fan Club.

Evie, the focal point of the plot, is convincing, not only as a seven-year-old with a little brother, but also as an adopted child who is beginning to question her place in the family. What is making her act up – is it sibling jealousy, adoption-angst or something else? She is a sullen, secretive child; how secretive the reader only starts to understand with the discovery of presents left for her by her birth father. The interaction between these three main characters is emotional and dramatic without being melodramatic.

The rest of the cast are well portrayed, and any walk-on characters have just enough colour to bring them to life, although I felt at first Harris, Zoe’s fellow artist, was a little clichéd: dark, brooding and charismatic. There were no guesses where that was going.

Although it doesn’t say it, the first chapter is a prologue. It gives foundation, and throughout the rest of the book, backstory is discreet. At no time does the reader feel bogged down by history. This certainly helps with the pacing, which is fast.

I have to be honest and say I’d worked out whodunit before that person dunit. But I think that is more to do with my slightly warped mind! However, there are discreet clues if the reader picks up stones and looks underneath them. There are enough twists to make a barbed-wire fence. And there are enough believable possible suspects and crimson herrings to keep one guessing.

I was disappointed with the heavy-handed baddy-spills-the-beans chapter. It was the stuff all good pantomimes are made of, and curdled my suspension of disbelief for a while. But the ending is satisfying; the horizon is there, but littered with real worries.

For readers who like a blend of domestic noir and suspense, The Stolen Child, with its themes of family life, adoption and bad choices, is utterly absorbing. The book is an easy read in one sitting, with a tight plot and attention to detail, and is one of my favourite reads this year.