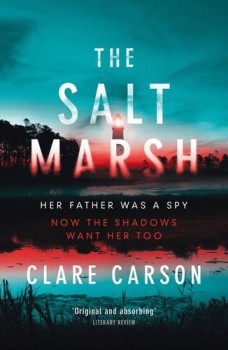 Sam Coyle’s father lived and died in the shadows of undercover policing among the criminals, spies and radicals of Cold War London. He left nothing to his daughter but tradecraft, paranoia and enemies.

Clare Carson’s follow-up to her debut Orkney Twilight is improbable to the point of being completely unbelievable: relentlessly and trendily PC and stuffed with enough left-wing conspiracy theories to keep The Guardian in print until the end of time! But this eclectic mix of environmental activists, hippies, spies, criminals, drug dealers, hitmen – and witches –  makes for a truly haunting and unique narrative, intelligently written, evocative and again, with a superb sense of tension and place.

She once again exploits coastal locations, like Orkney in her first book, to root the reader in that strange territory between the desolate beauty and mythical nature of the bleak Kent and Norfolk marshes, and man’s desire to pervert these natural resources to nefarious ends.

Throughout the story Carson achieves the difficult balance of the scientific with the philosophical and the alchemical with themes of myth and superstition. The result is an intelligent, involving, and frequently moving book far above the level of standard thrillers.

Sam Coyle’s father, Jim, was an undercover policeman, something that was kept completely separate from family life. But as a young girl, she becomes unwittingly involved in his dark world. During a visit to a fair with her father, she notices a man watching them, and Jim suddenly disappears. The man approaches her and makes it clear he knows who her father is – a day which still haunts her. Years later and Jim is dead, murdered apparently in the course of an investigation. When Sam’s boyfriend goes missing, her efforts to find him reveal at least part of Jim’s undercover work, the events that led to his death, and put her own life in jeopardy.

The story is set in the mid 1980s, towards the end of the Cold War. Sam is a typical middle class girl of the period. Rebellious, pot-smoking, pro-CND, environmental causes and direct action – largely anti-establishment. She is also aggressively intelligent and has won a scholarship to an elite Oxford college which she has given up owing to the stress of her father’s killing. Sam, by turns, smart, slick and funny, wilfully stubborn or emotionally naive, tempered by an admirable sense of right and wrong, cannot lay her father’s ghost to rest as she tries to deal with her own confusion and ever-increasing distrust of those around her.

The well-drawn relationship with a father she clearly adored is the real heart of the story as Sam explores the truth of her his past. Carson’s own father was an undercover detective. A psychiatrist might spend some time speculating how much of her own teenage frustration over not being able to talk about his job, even perhaps wondering if it served a purpose, has gone into her principal character.

No matter. This clever story, which explores grief, redemption and trust, moves from the seedy nightclubs of Soho to the salt marshes and shingle spits of Norfolk and Kent. The noirish plot is well planned and executed with plenty of interesting layers.

If you’re a ‘rightish’, OCD, ex-crime reporter like me, who had the privilege of knowing one or two real Jim Coyles, it’s not hard to pick a few factual holes in the narrative. Crying international hitmen and a fanciful unofficial CIA involvement make it a bit strong to swallow, but Carson makes clever use of facts like the Brinks-Mat robbery and the Sydenham axe-murder of PI Danny Morgan, said to be connected to both drugs and police corruption, to provide authenticity.

That’s not the point. This beautifully-written tale, with its unique storyline, strong characters and atmosphere of tension and intrigue, is a book to treasure.