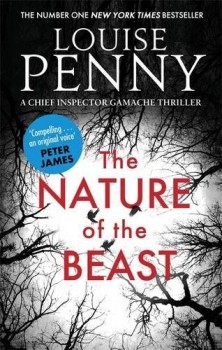 The Nature of the Beast

Chief Inspector Armand Gamache has retired to the small village of Three Pines. He goes back to work when a nine-year-old boy disappears, and discovers something in the woods that represents a threat to world safety.

After a career in the Surete du Quebec, Chief Inspector Armand Gamache has taken retirement at the age of 58 to Three Pines, a small rural community hidden in the forest which has featured in many of his previous outings. The book starts with a village boy, a fantasist called Laurent, appearing in the local bistro with tales of a giant gun in the woods, a gun with a monster on it.

Laurent has a history of tale-telling, so his story is not taken seriously. Even after the discovery that he has had a serious accident it is some time before a connection is made. Investigation falls to Isabelle Lacoste, Gamache’s replacement as Head of Homicide, and Inspector Jean-Guy Beauvoir, but Gamache himself remains at the focus of activity.

It is evident that the key to events lies within Three Pines and its small tightly-knit community. As evidence is slowly brought to light, the locals evaluate the implications and the finger of accusation wanders between likely suspects, a limited cast: Gabri and Olivier at the B&B and bistro, Myrna with the bookshop, Antoinette and Brian at the playhouse, Al the draft-dodger and partner Evie, and Ruth Zordo, an old poet who lives with a duck.

These characters, Gamache and his wife Reine-Marie, and a few outsiders, all rub shoulders and discuss developments at length, frequently over sophisticated meals: ‘quinoa, cilantro and apple salad’ for example. Such is the time devoted to these interactions that the book approaches 500 pages in length. Those who enjoy the minutiae of village life and detailed rumination of the locals will find this a pleasant space in which to dally; others may find the pace a little slow.

A sub-plot connects events with John Fleming, a serial killer incarcerated in a special handling unit for crimes too horrible to tell the reader about, except by way of regular hints, which become a little tiresome. It turns out that Fleming may have valuable information, and Gamache considers engineering his escape in exchange. No matter how good his contacts with SHU staff, this strikes me as impossible, or at least I would very much hope so.

The biggest plot element, however, is the discovery of something dramatic in the woods that extends the scope of inquiry. Agents of the CSIS, the Canadian secret service, and specialist experts arrive to monitor the investigation, and the whole story takes on a much wider scope. I was all set to blast the credibility of that too, but was wholly dished by the author’s postscript which explains that key elements are based on actual fact. Good job I read to the end.