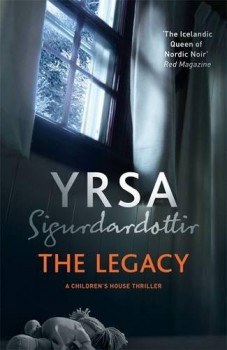 Out of his depth detective Huldar and the child psychologist Freyja must work together to get any information from seven-year-old Margrét, the only witness to her mother’s horrific murder.

Seven-year-old Margrét, found under the bed in the room where her mother Elisa was murdered, wants to block all memories of the harrowing event. Her two younger brothers were locked in another room at the time. Her father was on his way to a medical conference in the States, yet she blames him for what had happened. At the scene the police discover disturbing evidence that doesn’t seem useful, apart from a note with some numbers scribbled on.

Newly-promoted detective Huldar is baffled by the completely unexplainable situation and decides to seek help from the psychologist Freyja and the Children’s Home, known for their experience with traumatised young people. The limited details coming from distressed Margrét, the crucial and only witness, don’t shed much light, except for a mention that the murderer was a man determined to teach another woman a lesson.

Away from the formal investigation a chemistry student and a social misfit Karl has only two friends and one passion: shortwave radio. His adoptive mother has died recently, his adoptive brother moved to America and Karl remains in a bubble of occasional illegal cigarettes, self-pity and despair. When he starts receiving very strange coded messages broadcast only to him, he gets anxious, especially as he realises that there might be a connection to the murdered Elisa, and then to his horror, to a killing of another woman. Karl contacts the police but is dismissed as another attention-seeking freak.

Margrét seems to be in danger. Lack of forensic evidence means that the police can’t even concentrate on red herrings: basically they are stuck. Huldar battles with his own feelings of inferiority and being an imposter within the police hierarchy. Tension in his immediate team of two sidekicks, the adoring yet masculine Erla and immaculately dressed and recently divorced, slightly unhinged Rikhardur, only adds to the awkwardness he’s experiencing.

Also, following a truly unfortunate personal encounter with Freyja, he knows that the search for a potential serial killer is going nowhere if he cannot persuade her to work closely with the investigators. While Freyja’s brother is in the prison she looks after his flat and a dog Molly, and she and Huldar move between professional attraction and distrust while keeping various secrets from each other.

Yrsa Sigurðardóttir beautifully explores nuanced relationship between main players in this drama of wills, and her imagination knows no bounds! In fact it is scarily incredible, and the ingenious ways to extinguish people’s lives are so shocking that you will never think of domestic appliances in the same way. And the duct tape will take on a completely different meaning … Yet these methods are also weirdly comprehensible, if you take into account how the consequences of past decisions shape the characters’ development, their choices and twisted logic. In this case separation of three small orphaned siblings in 1987 had caused a dark and bloody future for the apparently random victims nearly 30 years later.  Every word has its place in the puzzle that delivers the most unexpected shocking and sad finale.

The Legacy, originally entitled DNA, begins a new creative journey for Sigurðardóttir, famous for her inimitable style in the striking standalone novels and unforgettable series starring lawyer-turned Thora Gudmundsdottir. The Icelandic Queen of Crime has pulled together police procedural with all aspects of boring tasks and dead-end clues, elements of Icelandic social history and various flawed characters to create another thrilling story. However, hidden in the killings and ordeals you will find love and her trademark dark humour, and a desire to understand.