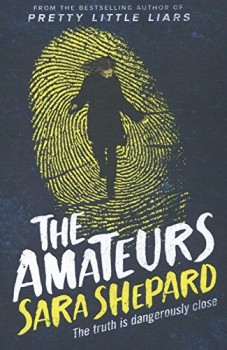 Case Not Closed is a website devoted to solving cold cases. When Aerin Kelly posts there about her sister’s disappearance and murder, several members decide to help.

Aerin and Helena Kelly are sisters and close friends despite a six-year age gap, and Aerin idolises her elder sister. Then one day, when they are having fun in the snow, Helena asks Aerin to fetch something for her from the house. When Aerin comes back, Helena has disappeared without trace. Four years later, Helena’s remains are found in woodland by a dog walker. The police investigation goes nowhere and Aerin is left to deal with her grief over her sister’s unsolved murder.

Two years later, Aerin posts on a website called Case Not Closed, where members devote their time to solving cold cases that have been dropped by the police. They have a good track record and Aerin hopes they can help her. She makes a friend there called Maddy and is pleased when some others show an interest in the site.

Nineteen-year-old Seneca Frazier hooks up with Maddy Wright from Connecticut and agrees to meet her friend in the town where Helena went missing to see if they can help Aerin on her quest to find out who killed her sister. But when Seneca arrives in Dexby, Maddy Wright isn’t quite what she was expecting, and when faced with people on her doorstep, Aerin isn’t exactly welcoming. But despite their initial misgivings about each other, the group, including Brett, another member of Case Not Closed, agree to work together to solve the mystery of Helena’s disappearance and death.

The Amateurs has a distinctly Nancy Drew vibe to it, laced with added drink, sex swearing and smoking. The teenagers are a mixed bunch. Aerin is abrasive and not terribly likeable, Maddy is a classic sporty type, into high-level competitive running, possibly with an Olympic place in reach, Seneca is haunted by grief following her mother’s death, Brett is very into fashion and can empathise with both Aerin and Seneca, even if it takes a while to understand why. Sara Sheppard introduces the young sleuths gradually, with the reveals building up as the investigation progresses.

It’s soon clear that someone doesn’t want them in town and doesn’t want the investigation to succeed. But every lead the group pursue seems to close down.  Sheppard weaves a clever web of suspicion and intrigue. I made several guesses as the book progresses – all very wide of the mark – but there’s never any sense of being deliberately led up the garden path. The characters grew on me as more about them and their motivations is revealed. The final reveal was as shocking as it was unexpected.