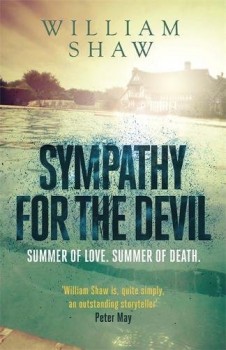 Sympathy for the Devil

A prostitute with an influential client list is murdered. DS Cathal Breen finds himself blocked as the case assumes international importance. Meanwhile, his pregnant girlfriend, former WDC Helen Tozer, brings her intuition to the investigation – wanted or not!

Who remembers the Rolling Stones’ controversial 1968 single which gave the title to the latest outing for the crime-busting duo of Breen and Tozer? The song, which led to suggestions of Black Magic involvement, and surprisingly enough was set to a samba beat, featured Jagger as lead vocalist, fronting co-writer and arranger Keith Richards, Bill Wyman, Charlie Watts, Nicky Hopkins on piano, and Rocky Dijon on congas. Among the backing vocalists were girlfriends Anita Pallenberg, Marianne Faithfull – and the band’s originator Brian Jones – one of his final appearances before being sacked over his increasingly bizarre and unstable lifestyle.

And it is Jones’ death less than a year later – found drowned in the swimming pool at his home while on a cocktail of drink and drugs – and the conspiracy theories which still surround it, which provides a spectacular opening and reference point throughout this powerful and clever fourth adventure for the mismatched detectives.

Cathal Breen, now a divisional detective sergeant, and Helen Tozer, a former detective, now heavily pregnant, have a difficult relationship. They met through a murder – an investigation which almost cost Breen his life. Breen is kind and honest, but a typically buttoned-up Ulsterman – old fashioned, uncommunicative and deeply uncomfortable with the changes of the Swinging Sixties, now reaching their climax in the 1969 ‘Summer Of Love’. Tozer, the Devon farm girl who joined the police after her sister was killed, is headstrong, emotional, driven by her instincts and fierce moral sense. Her pregnancy, in the heat of summer, has made her disgruntled and distant, resentful of her ambitions being thwarted while her boyfriend is still doing the job she so misses.

Breen is investigating the brutal killing of a Polish prostitute, known as Julie Teenager, who peddles a little girl persona to a select list of influential and well-off clients attracted to her in a age when youth seems to be all. Blocked, misled and under pressure from his superiors, he becomes more determined than ever to bring the murderer to justice, particularly when it appears one of her clients may have been a policeman.

Is there a top-level Met conspiracy to protect their own? When D-notices stop publication of press inquiries, the investigation takes on a political aspect with security service involvement and an international spy-swop at stake. As Breen tentatively looks forward to the birth of his child, there is a second and similar killing – one which he feels he could have prevented.

All this takes place against a brilliantly created and often factual background which Shaw melds seamlessly into a London very much of its place and time. With no forensic science or criminal databases, Breen must follow the age-old methods of detection, constantly hampered by the rifts and rivalry between uniform and CID and division and the pampered specialist squads of C1– Scotland Yard.

He walks his readers through the backstreet coffee bars and cafes to popular haunts of the trendy, such as Tramp, deserted pop star mansions, the poster-filled walls of a city beginning to worship fame, while never missing the contradictions, the bigotry and brutality, the casual sexism and racism, at a time when the Cold War still had the possibility of hotting up and the global misery, waste and destruction of the second world war is still remembered by many.

Shaw creates a dark and corrupt city and his pacy and well-constructed plot holds the reader’s attention through to a morally ambiguous conclusion. It’s tense, dramatic and ingenious, and at times you will wonder whether this gripping thriller could possibly end well.

Breen’s moral integrity and values are tested to breaking point, but his perceptions are solid and well-founded and combined with Tozer’s flashes of intuition deliver a first-class crime story with a conscience – and a very real sense of natural justice.