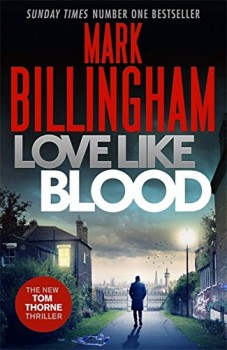 The usually strait-laced DI Nicola Tanner teams up with archetypal maverick DI Tom Thorne to investigate a series of killings.

In Love Like Blood, Mark Billingham tackles a difficult and emotive subject, that of so-called honour killings – a term that annoys me even more that the euphemistic ‘joy-riding’. Tell it the way it is, the latter is theft and the former is murder.

DI Nicola Tanner is on compassionate leave after the brutal murder of her partner, teacher Susan Best. Bleach was sprayed into Susan’s eyes and she was stabbed. The grieving Nicola has not been allowed anywhere near the case but, for once, Tanner has no intention of following the rules. She enlists the help of DI Tom Thorne, a man whose disregard of rules is legendary. Tanner is convinced that Susan’s death was a case of mistaken identity and that Tanner herself was the real target. She’s been investigating a series of killings within the Muslim, Sikh and Hindu communities and is convinced that they are the work of contract killers paid for by family members who are unable to carry out the murders themselves.

In each case, the methods and locations were different, but Tanner is convinced that a pair of hitmen are operating and to get Thorne on board with her theories, she reminds him of the case of Meena Athwal, a young woman who had been raped and strangled four years previously. Her family had all had cast-iron alibis which Thorne had been unable to break and her murder is still unsolved. It’s enough to pique Thorne’s interest. Then Amaya Shah and Kamal Azim go missing, and Tanner is certain their disappearance fits the pattern of the other killings. They are both 18 and from Bangladeshi families. Tanner believes there is something fake about the reaction from their families and she convinces Thorne to pulls some strings to get the case assigned to him.

Nicola Tanner appeared in Billingham’s previous book, Die of Shame. There, she came over as something of a colourless character who certainly didn’t jump off the page, but here she comes alive, burning with the need to find her partner’s killers and is quite happy to manipulate everyone around her to into turning a blind eye to her involvement in the investigations into both Susan’s death and the disappearance of the two teenagers.

When Amaya is found dead, suspicion falls on Kamal, and Thorne’s long-suffering boss, DCI Russell Brigstocke, is determined that the investigation will concentrate on the obvious conclusion that Kamal was responsible for the death of his girlfriend, but both Thorne and Tanner are certain they are being deliberately led to that conclusion.

Billingham handles a difficult subject well, shining a harsh light on the families who seek to control both young women and young men, forcing on them the cultural and religious norms that they want to break away from. There is no honour in the killings described and to use that name is to bestow a false legitimacy on them. Love Like Blood is, and should be, an uncomfortable read. It’s also tense, gripping and well-characterised. And, as ever, there is a twist in the tail that I didn’t see coming.