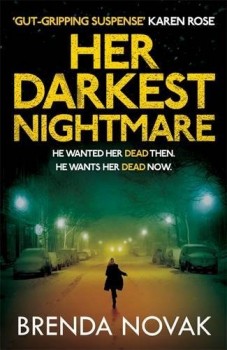 As a teenager, Evelyn Talbot was abducted, tortured and left for dead by her psychopathic boyfriend. Now, as an adult she has established a mental health facility in Alaska, specifically to research psychopaths. When the murders start suspicions and fear grow in the isolated community.

Evelyn Talbot was traumatised at the age of 16 by being abducted, tortured and left for dead by her 17-year-old boyfriend. She has embarked on a career to investigate the behaviour of psychopaths with a view to understanding and dealing with the threat caused by the condition. She establishes a clinic and research centre in an isolated town in Alaska, where known psychopaths are housed, cared for by prison officers and investigated by a team of specialists.

Evelyn is haunted by Jason, her childhood abductor, who had returned after more than 15 years, to try to abduct her again. All of the people in the centre, Hanover House, whether inmates or staff, are aware of her personal circumstances.

When two women who work in the centre go missing, and then the head of one and the arm of the other are displayed in a threatening manner, it appears that Jason is once again intimidating Evelyn.

It is winter in Alaska, there are severe storms, and there is almost no daylight. The only local law enforcement is Amarok, an Alaskan State Trooper, seven years junior to Evelyn but for whom she develops an increasingly passionate attraction despite the problems caused by her experience as a teenager. This relationship, over-ridden by the uncovering of a sexual scandal and growing unrest and conflict among the staff at the centre, reflects the brooding and oppressive weather and the strong sense of isolation, both geographical and in terms of human relationships.

The book is very well written. It is evocative of place and person. The characters are skilfully drawn, their personalities and interactions have enough ambiguity to ensure that their actions are not predictable and there is no certainty regarding who can and cannot be trusted. Evelyn’s relationships with the psychopaths and with the staff contrast well and are very believable.

The pace of the novel is sustained well and picks up as it proceeds to its climax. This was another time where I had to tell myself that it was OK to sit and finish the last 70 pages, even though I had other things to do, because I had to know what happens in the end.