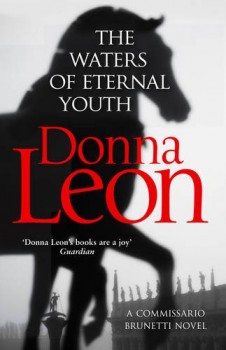 The Waters of Eternal Youth

Commissario Brunetti is asked to investigate the case of a young girl who nearly drowned 15 years ago. Brain damage has left her trapped in the mindset of the young girl. He must find out how she came to be in the water, and whether she fell or was pushed.

Following a dinner party at his mother-in-law’s house Commissario Brunetti finds out that the elderly Contessa Lando-Continui has a burning question that she wants to solve before she dies. The question involves her grand-daughter. Some years ago the girl either fell or was pushed into one of the canals in Venice and almost drowned. As a result she suffered brain damage and her mental development was restricted. Brunetti has to negotiate his way through the police department politics to get the case re-opened.

More than anything the story is an opportunity to spell out the case for the preservation of Venice. The way in which the city is being developed to attract tourists is compared with the difficulty found by young people in making Venice their home. Apartment owners rent out their properties to tourists from whom they can demand high rents, leading to a lack of cheaper rented properties for youngsters. Note is also made of the demise of independent retailers, and the increase in crimes such as mugging and theft. The detail is minutely observed even down to the effects of migration and changes brought about by new technology.

As always with this author the personal aspects of life are dealt with very sensitively. The young girl and the way in which she behaves are recorded thoughtfully. Brunetti’s character too is examined in great depth. He constantly reflects on events and on his own behaviour and in particular worries about getting older. There are numerous scenes involving Brunetti’s wife. Indeed, Brunetti’s analysis of the way in which his wife talks to her family and the strategies she uses to control and nurture them all could be called a masterclass in how to manage teenagers and husbands!

Whilst all these aspects of Venetian life are being addressed the story is very slowly and gently being developed. The plot wanders along through all the divergences: family meals, society teas, machinations at the office, walks, boat trips, horse riding and more. It is a comfortable read which bumbles along but in consequence when violence does occur, the horror is genuinely unpleasant and out of place in the locations in which it occurs. This is mainly a very clever way of manipulating the reader’s emotions. But it is not always deliberate as in when the action speeds up and there are one or two editorial problems. Despite being obvious errors, even these contribute positively and add, for example, to a moment of confusion with umbrellas in the wind in the narrow streets.

The book is quite riveting but not just for the police investigation.