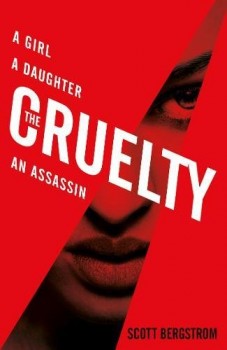 When Gwen Bloom’s diplomat father goes missing, she’s forced to take matters into her own hands if she ever wants to see him again.

Sixteen-year-old Gwendolyn Bloom’s stepfather is a diplomat with the US Secretary of State. Her passport says she’s an American, but she wasn’t born there and she’s only lived in the United States for 18 months following her mother’s death. She’s at an elite school for diplobrats, as Gwen calls them, and speaks several languages fluently.

When her father goes missing, presumed kidnapped, Gwen isn’t exactly bowled over by how much effort his bosses seem to be putting into his safe recovery and she realises gradually that the reason for the inactivity is rooted in the suspicion that her father hasn’t been snatched. He’s actually believed to have defected, which puts a rather different complexion on things.

Gwen doesn’t believe her father is a traitor, and it’s not long before she decides to take matters into her own hands and start looking for him. With the help of her elderly neighbours, Gwen soon finds herself deeply immersed in the murky world of spies, professional assassins and crime lords that her father has done his best to shield her from.

The Cruelty is a fast-paced, slick and utterly engrossing young adult thriller. To say Gwen rises to the occasion would be an understatement. Her pursuit of her father’s kidnappers leads her from the USA to Europe. She learns spycraft and combat from a female Mossad agent, but to survive in the terrifying world of organised crime and people-traffickers, Gwen must become as ruthless as the gang she is hunting. Her loyalty to her father is tested to its utmost, as are her morals, and in the dangerous world Gwen is now inhabiting, something has to break. And there’s a very real prospect that will be Gwen herself.

Gwen Bloom is a tough, resourceful narrator. Her flair for languages stands her in good stead, as do the survival skills she learns from the even tougher Yael, but Gwen’s wry perspective on lie coupled with her dry humour keeps her feet firmly on the ground. This is not a story I needed to suspend my disbelief for. I felt like I was there at Gwen’s side, every step of her way across Europe to Prague, where she has to maintain her cover to get close to the gang boss she believes is holding her father. When she has to take hard decisions, you’ll be there with her, wondering what the hell you would do in the same situation. I was absolutely hooked and finally gave in to the need just to keep reading until I knew how Gwen’s story ended.