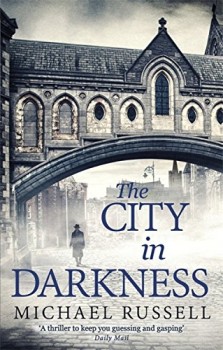 The City in Darkness

In 1939, neutrality distances Ireland from the struggle in Europe, but the Irish Special Branch have plenty of concerns about what is happening at home.

It’s 1939 and Garda Detective Inspector Stefan Gillespie is assigned to monitoring Irishmen leaving to join the British forces; despite his German ancestry it is a job he finds questionable. He is reassigned when the IRA raid a military arsenal. Much of the stolen ordnance is soon recovered, and small fry incarcerated, but senior men are still at large, and Gillespie has reason to think the IRA have his superior Terry Gregory to thank for it.

Shortly afterwards he is moved away from Dublin to rural Laragh, where a postman, Byrne, has disappeared. Documents in Byrne’s rooms suggest he knew the true story behind a number of local deaths, including the drowning of Gillespie’s wife Maeve, years earlier, until then thought to be accidental.

The key to the deaths lies in Spain, and fortuitously Gillespie has the opportunity to visit, as both protector and spy upon Leopold Kerney, the Irish Ambassador to Spain.
Frank Ryan, a former IRA man, was incarcerated in Borges after the civil war in Spain; for reasons unclear the Germans are helping to broker his escape and Kerney was the point of contact. Gillespie travels with Kerney with two mysteries to unravel.

This is the third Stefan Gillespie story, and its quality makes me very keen to find the previous two. It is a brilliant mixture of wartime brutality, crime, espionage at a very tense period of history, and the personal tale of a man struggling to unravel matters of crucial personal relevance, and is a very difficult book to put down.

The complexities of the war in Spain, the Irish Government’s attitude to the IRA and to the parties in the European conflict, and the competing interests of the Irish military and the police Special Branch are all brought in to the story without being in any way didactic. Irish perspective and preoccupations give a refreshing slant on events normally viewed through the lens of the big powers.

As indicated above, the action moves from central Dublin, to rural Ireland, and through Spain, all convincingly evoked as it was three-quarters of a century ago through deft touches. Against this background, Gillespie comes across as a decent, brave and intelligent man without illusions as to the political dimensions of his job.

The death of Maeve comes as a brief introduction to the book, so that right from the start the reader is aware that the death was not the misadventure found by the coroner. Gillespie has put together a new life since Maeve’s loss, although both his young son Tom and his girlfriend Kate are conscious of some restraint. Gillespie comes to the evidence that Maeve was murdered with the sense of something he already knew. The final events are both surprising and gripping, a fitting ending to this thoroughly enjoyable read.