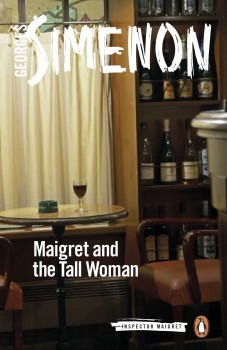 Maigret and the Tall Woman

Maigret receives a surprise visit from a former prostitute he had arrested many years before. She tells a strange story and asks for his help.

The ‘tall woman’ of the title is Ernestine Jussiaume whom Maigret had arrested 17 years previously. Now she enters his office with a somewhat unlikely tale, asking him to help her. We immediately see the humanity in the Maigret stories as he listens to a former prostitute when he would have been well within his rights to refuse even to see her, particularly since she had proved troublesome at the time of her arrest.

Nor is his decision based merely on her having information that it might be worth his while to discover. He listens to her because he thinks she deserves a hearing. This same kind of sympathy is extended to Maigret’s colleague, Boissier, whose spelling and bad handwriting have prevented him from passing his promotion examinations.

The tale Ernestine tells is a strange one. She is now married to a professional burglar who had recently sought to break into a house in Neuilly. Whilst doing so he had come across the body of a woman and, fearing that he might be a suspect in a murder investigation, had immediately left. He had apparently called Ernestine to let her know what had happened and had told her that he was leaving Paris.

Maigret agrees to look into the case and soon finds out that the house in question is occupied by a dentist, his wife and his elderly mother. Significantly, when Maigret calls he is informed that the wife is no longer there and that she has decided to return to her native Holland. He decides that an investigation is required.

This is a somewhat unusual Maigret novel because on this occasion the detective’s observational and deductive skills prove inadequate. Faced with Serre, the dentist, who says nothing if he can possibly avoid it, and his mother, who talks a lot but tries to avoid answering Maigret’s direct questions, he decides that the only way forward will be to resort to a bluff.

Maigret is convinced that Serre is guilty but realises that it will be difficult to prove. His bluff consists of arresting him and trusting that he will give himself away under questioning. In fact, Maigret almost oversteps the mark of what is legal as he keeps Serre alone for hours in an attempt to tire him out and cause him to make mistakes when regularly interviewed. Simenon makes the verbal battle in the interview room very real as Serre stubbornly refuses to answer Maigret’s questions.

When the answers do eventually begin to emerge they provide a picture of malice and evil that the reader had not anticipated, making for an ending which, whilst depressing, is entirely in accord with the events leading up to it. Just for once, however, we have to regard Maigret as being rather lucky to solve a case which, had he not shown such generosity to the former prostitute, might well have defeated him.