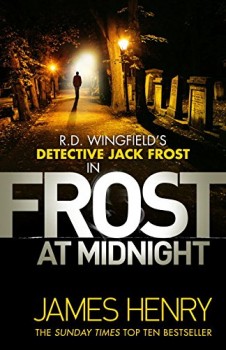 DI Jack Frost has a wedding and a murder to contend with in Denton during the hot summer of 1983. And then a woman goes missing.

It’s 1983 and DI Jack Frost and the rest of Denton nick are preparing for a wedding. DS John Waters is marrying Kim Myles and, for some strange reason, he’s asked Frost to be his best man. What could possibly go wrong?

Well, to start with, on their way to church for a wedding rehearsal, the body of a woman is found in the graveyard, lying on top of one of the tombs, the back of her head bashed in. The woman, Rachel Curtis, was a former stripper at the Coconut Grove. The previous year, she’d carried out an armed payroll robbery, shooting two men, one of whom later died in hospital. Much to local outrage, the judge was lenient and took into account her need to escape a controlling boyfriend, and she’d been given a suspended sentence and allowed to return to Denton on licence. The widow of the man who’d died in hospital has been heard vowing vengeance.

At the same time, a local prostitute goes missing, leaving behind her young son. This piles more pressure onto Frost, who has spent the last couple of months since his house was sold following his wife’s death sleeping on a friend’s sofa. But Sue Clarke wants to go back to her job in the police and she wants Frost off her sofa. He doesn’t get on with her baby and he certainly won’t get on with her mother.

As ever with a Jack Frost book, there are more strands to the plot than you’ll find in an Afghan rug. Frost is as shambolic as ever, with unwashed clothes and a bushy beard, and there were times that I thought one of our best-loved fictional coppers was in danger of turning into a caricature of himself. James Henry has done a good job of rolling the clock back for the Frost of RD Wingfield’s classic series. Frost is 40, but is showing distinct signs of turning into the man I remember from reading the original series when they first came out in the late 1980s. I devoured the series at speed, even though after a while, they did become somewhat formulaic, and this is starting to happen to these prequels.

But despite that reservation, James Henry exploits the old formula perfectly, even down to Superintendent Mullet’s preoccupation with expenses claims. Hornrim Harry, as Frost knows his superior, is preoccupied with his own problems: high blood pressure, a wife who was accidentally involved in a hit and run, and, the biggest cross of all to bear, his maverick DI. The book has a nice flavour of the 1980s and Frost feels true to the character I remember from the original books. How you picture him, though, will depend on how you feel about David Jason in the screen version, but for me it’s hard to think of Frost without thinking of him.

The strands do eventually all come together, but you’ll have to have your wits about you to predict how things will work out.