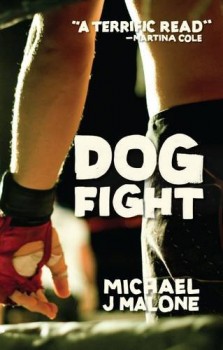 An underground fight ring is sucking in former soldiers living on the streets with promises of big money. But the risks are high and there’s no easy way out.

Michael J Malone doesn’t shy away from difficult issues. In A Suitable Lie, he tackled the subject of domestic violence against men, something that all too often gets swept under the carpet, and in Dog Fight, he plunges into the deeply troubling world of former soldiers, many of whom are deeply traumatised by the experiences of combat, and have been cast adrift to fend for themselves in a society that can’t even begin to understand what they’ve lived through.

Dog Fight deals with the men who’ve fallen through the holes in the army’s support net, like 25-year-old ex-squaddie Dom Hastie who was shot in the head in a so-called friendly fire incident in Helmand Province and suffered brain damage that has left him with one useless arm and an equally useless foot, speech difficulties and severe anger management issues. Dom is now trapped in a high-rise block, separated from his wife and only able to see his son on rare occasions.

Ian Ritchie knew Dom from their time together in a combat stress rehabilitation unit, and when he discovers that Dom owes money for the drugs that bring him some relief from the constant pain he has to suffer, he isn’t prepared to stand by and let his friend be bullied. But it doesn’t take long for Ian to end up in deep trouble having to work off Dom’s debt by getting involved in an illegal underground fight ring that takes ex-soldiers and pits them against each other in a series of increasingly vicious combats.

Ex-copper Ray McBain doesn’t believe the rumours about the fights, but Richie’s cousin Kenny O’Neill isn’t so sure. When Ian goes missing after a somewhat explosive family dinner, it’s up to Kenny to do what he can to save Ian’s skin.

Dog Fight sucked me in from the opening chapters. Malone’s characters are perfectly drawn and the action is searingly brutal. I hadn’t met either O’Neill or McBain before, but enough information from previous books is deftly dropped in so that I never felt out of my depth in backstory. The friendship between O’Neill, who operates on the wrong side of the tracks, and the cynical McBain is as unlikely as it is perfectly understandable. Eleven-year-old Myleene, who offers to mind cars for a fiver an hour, is an entertaining urchin who could easily have claimed a place in John Buchan’s Gorballs Diehards, but she’s also a neglected child, streetwise beyond her years.

The fights pull no punches and neither does Malone’s writing. It’s terse, raw and very, very addictive. I was desperately hoping for a happy ending, but knowing that for so many of the men cast adrift into a life on the streets, facing their own internal demons every day, happy endings are few and far between.