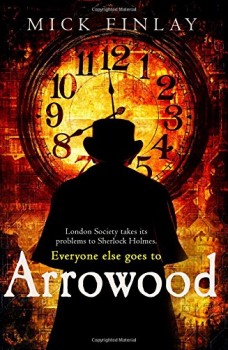 A missing-person case for down-at-heel private eye William Arrowood and his friend Norman Barnett spirals into an investigation of sexual exploitation, perversion, murder and terrorism.

It had to come – and Mick Finlay leads a backlash against the rising tide of Sherlock Holmes imitators with this atmospheric and detailed depiction of a London the Great Detective in any of his representations would hardly recognise in this downbeat, down-at-heel and dark story of Victorian society.

His very anti-hero is the fat and not very appealing William Arrowood, ex-journalist turned private eye, who seeks solace for a failed marriage in the bottle and the company of prostitutes. He’s a suitable character for his milieu – the dark, filthy, densely populated, disease and crime-ridden streets and alleyways of Southwark, one of the capital’s poorest boroughs, where families do whatever they must to survive.

While the elite turn to Holmes to solve the crimes an overstretched and often corrupt police force cannot deal with, the poor of sleazy south London use the dubious skills of this self-taught, opinionated and obstinate psychologist. Arrowood is openly critical of Holmes’ methods and deductions – which he mocks at every opportunity – but it is clear that much of this derision in motivated by jealousy, which brings some wry humour to the narrative.

In the best Conan Doyle tradition, even this crumbling human failure has his amanuensis. Former solicitor’s clerk Norman Barnett takes the Watson role, but contributes rather more than the good Doctor both in terms of detection and violent physical involvement, while at the same time hiding a personal tragedy.

The plot, involving crooks, Fenian terrorists and street gangs is nicely constructed and paced. What starts as a deceptively simple missing-person case spirals first into murder then sexual exploitation, perversion and murder. The story is well-written, with a strong and intriguing storyline and convincing historical detail, and builds gradually through a positive mesh of intrigue – the slow piecing-together of a jigsaw rather than flash of Holmesian brilliance, which both reflects the flawed main protagonists and gives the opportunity to expand on their personal lives.

Despite this, Finlay is a deft story-teller with a real lightness of touch, which makes this both an interesting and enjoyable read. Cynics like me may find their credulity stretched a little by the rather politically correct depraved upper class capitalists, crooked ‘businessmen’, strong women or nobly motivated ‘freedom fighters’ in the south London slums of 1895, but this is a clever and eminently readable debut – and one which will hopefully inspire Finlay to further adventures for this likeable alternative detective pairing.