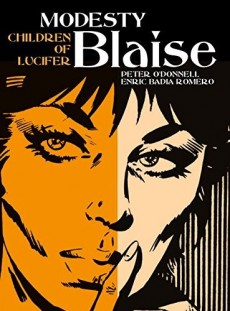 Three new stories see Modesty Blaise and Willie Garvin go up against seemingly impossible odds in their own, inimitable way.

The arrival of a new Modesty Blaise comic strip novel is guaranteed to brighten my day. I’ve been addicted to her adventures since I first discovered Peter O’Donnell’s books in the early 1970s.

The original comic strips were harder for me to get hold of, but I devoured the Titan Books ‘Old Series’ from 1985 to 1990 whenever I could get hold of them and even collaborated with a friend to get copies of the American Edition series shipped over here with the help of a wonderful comic store on Park Street in Bristol called Forever People, sadly long gone. So when I discovered that Titan had restarted the series in 2004, it was like discovering that Christmas and several birthdays had all come at once!

The latest book starts with an introduction from screenwriter and author Steph Penney who discusses Modesty as an icon for our times and it’s hard to disagree with her. For me, Modesty is the most iconic female character of them all, just as Willie is the best friend anyone could wish for. Friendship underpins all of Peter O’Donnell’s stories, as does love. But in his hands, there can be different types of love on different levels and it can be given freely and without jealously.

Modesty’s boyfriends, such as multi-millionaire business tycoon John Dall and the innocent, trusting doctor Giles Pennyfeather each know of the other’s existence, but that creates no problems. In the same way, Willie is free to have women in his life. But the bond between the two of them is as unbreakable as ever, with Willie never seeking to control Modesty or shield her from danger, even when they appear to be going up against seemingly insuperable odds. This book showcases all that and more.

In The Hanging Judge, the first of three stories in this latest collection, Modesty is asked for help by the formidable – and none-too popular – Lady Beaumont who lives in same village. Her daughter has been kidnapped and is being used to enable a criminal called Simon Vance to get revenge on her husband, the former Home Secretary who increased Vance’s prison sentence. Hannah Beaumont is being held prisoner and, on the 15th day of her captivity, will be hanged. All this is being captured in film and sent to her horrified parents. There’s no way Modesty will turn her back on someone in these circumstances, but they have no idea where Hannah is being held captive.

O’Donnell excels in writing gutsy women and that is never more in evidence than in the first and last of the three stories in this collection. Hannah Beaumont plays an active part in leading Modesty and Willie to the island that has become her prison, and with typical inventiveness, Modesty infiltrates the island under the guise of a stuntwoman on a wacky film production.

In the title story, Children of Lucifer, Modesty is relaxing with occasional boyfriend Giles Pennyfeather at John Dall’s skiing retreat, with Willie along for the more technical skiing as it’s as much as Giles can do to stay on his feet on snow, with or without skis. When they come across an unconscious woman in the snow on one of the more extreme runs, Giles’ skills as a doctor come to the forefront, as does his unswerving decency and Modesty finds herself cornered into helping save the life of three mafia drugs barons, something only Giles at his most insistent could have achieved. Giles also gets to demonstrate that he has learned a thing or two in his time with Willie.

The final story, Death Symbol, sees Willie Garvin in a struggle to save the life of the daughter of an old friend from his Foreign Legion days, a man without whom Willie would have died. A debt of gratitude of that magnitude affects Modesty just as deeply as it does Willie, and there’s no way she’s going to be left out of the rescue attempt. The woman is being held as a sex slave in a remote, hidden valley in Tibet, under the control of a bunch of well-armed and brutal deserters from the Chinese army who are forcing an entire village to work for them.

Willie has to stand by as Modesty infiltrates the camp, under the guise of a kidnapped woman being sold to the soldiers, but he respects Modesty’s decisions and never allows the depth of his bond with her to get in the way of their work. He is Modesty’s friend and protector, but not her keeper. She is more than capable of taking even the worst of experiences and putting it behind her. O’Donnell’s female characters are strong, and even after years of unpleasant captivity, the woman they’ve come to rescue and her companions are still capable of exacting their own revenge.

Children of Lucifer is the penultimate title in the Titan ‘New Series’ and it’s hard to believe that I’ll soon have all of the stories in my possession, to read and read again, as I have done with the books. I can only hope that Titan have been able to acquire the rights to reprint The Dark Angels, a graphic, novel-length story that appeared in a European magazine, as well as the graphic novel adaptation of the first book, produced by DC in 1994, as I’ve never managed to get my sticky mitts on either of them.