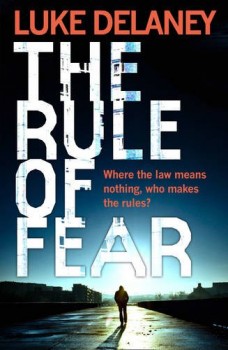 The Rule of Fear

Sergeant Jack King is destined for higher things but, for now, his job is to bring some much-needed law and order to the notorious Grove Wood estate.

The Rule of Fear signals a break for Luke Delaney’s usual series character DI Corrigan and instead introduces Sergeant Jack King, a uniformed copper on the accelerated promotion scheme. He’s expected to spend the minimum time on the front line before climbing quickly up the ladder and spending most of his time behind a desk. But King would far rather be out walking the streets and catching criminals, so when he’s offered the chance to run a small uniformed unit tasked with the job of bringing some much-needed law and order to the notorious Grove Wood estate, he jumps at it.

The estate is plagued by feral kids, drug dealers and burglars. The residents live in fear of leaving their homes in case they come back to find even their meagre possessions gone. Drug pushers hide behind metal grills and know better that to venture out with the keys on them, knowing that by the time the police get through to them, the drugs will be flushed or safely stashed somewhere unfindable.

King believes in tough policing, and seems to have been brought up on the policing manual as espoused by the writers of 1980s cop shows such as The Sweeney. Villains get slammed up against doors and a few good kickings are delivered, but it soon becomes clear that King doesn’t know – or care – where to draw the line. He’s been given a job to do and firmly believes you can’t make an omelette without breaking a few eggs. Although in King’s case he appears to prefer using his extendable baton to do the scrambling, rather than a wooden spoon!

Clichés are still alive and kicking in crime fiction and I swear that if I come across one more tortured copper called Jack with a drink or drugs problem then I won’t be responsible for my actions. Jack King ticks just about every stereotype the genre has to offer – good going for someone who’s only 24! He’s not long returned to work after witnessing the aftermath of a horrific family mass-murder which ended up with him receiving life-threatening stab wounds. Despite being an obvious candidate for PTSD, he’s passed as mentally and physically fit to work, even though he is still mainlining heavy-duty painkillers.

Luke Delaney is the pen-name of an ex-copper from the Met and there’s no denying the books have a ring of authenticity to them, although the fleeting mention of a WPC did make me wonder when he left the service. It makes a pleasant change to see most of the action in this book being about uniformed officers, and especially those in the lower echelons.

But if you’re here because you enjoyed The Bill, you’ll have a rude awakening as King’s actions soon spiral out of control and he starts to think that he is above the law he’s meant to be on the Grove Wood estate to enforce, not break. The plot moves on at a brisk clip and the characters are interesting, if mostly pretty unlikeable, with the exception of the one woman on the estate policing team, and even she is later forced into the victim stereotype.

The book suffers from some all too frequent point of view shifts and a couple of cringeworthy sex scenes that shouldn’t have made the final cut. Whenever I see a mention of ‘seed’ in this context, I automatically look around for the budgie! But despite these reservations, The Rule of Fear is a compelling look inside the rapidly disintegrating mind of a young man on a self-destructive downward spiral. It also paints a depressing picture of life on the sort of sink-estate from which only drugs seem to provide any means of escape.