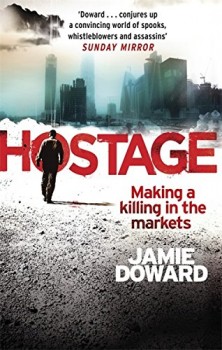 A man has been kidnapped, though there is no question of a ransom. He is locked in a car and succumbs to carbon monoxide poisoning. Soon others will be killed, but nobody knows why.

A man has been kidnapped, though there is no question of a ransom. He is locked in a car and succumbs to carbon monoxide poisoning. Soon others will be killed.

The overall plot of the novel, once it has been disentangled, is clever, inventive and – much as we would want it to be otherwise - believable. That, however, is all in retrospect because the disentangling is far from easy and at times the complexity almost threatens to ruin the story.

The reader soon recognises that what appear to be serial murders on the south coast of England must somehow be connected with the activities of the American and British intelligence services. Of course, the local police have no such insights. The murders appear to be random and the second one is particularly gruesome.

Kate Pendragon, formerly of the Treasury and then MI5, has joined the tobacco firm of Smith and Webb, where she puts her financial skills to good use working for the head of compliance. One day she has a visitor who turns out to be MI5. He makes it clear that he would like to re-recruit her and indicates that he has already managed to persuade one of her colleagues to help. What he wants with her is not made totally clear but he hints that the company’s worldwide exporting business could be of considerable advantage to the intelligence community.

From what he says, Kate feels that she might be much more gainfully employed in working again with MI5 and eventually accepts the offer. It takes her some time to see the connection between the victims of the local serial killer, her employers and 100 hostages being held in Algeria. However, she has one distinct advantage over the various intelligence organisations involved in the case – she actually wants to learn the truth of what is going on.

The problem in the first third of the book is that the author seems to want to bewilder the reader. A host of characters are introduced in rapid succession and it is only very gradually that we begin to see how they are related to each other. The confusion is exacerbated by the frequent change of scene. Just when we seem to be gaining at least a partial understanding of where a particular episode is leading, the scene changes.

However, any reader tempted to give up halfway through should resist the temptation because gradually we begin to see where the plot is leading and we are not surprised to learn that the tobacco company is involved. Unfortunately, the part it plays is never made very clear. There are a lot of references to tax havens, front companies, offshore trusts and the like, but a simple and clear statement as to how all this actually worked would have been welcome. Nevertheless, there is no disputing the drama and surprise involved as the story unfolds. The conclusion is not only convincing but also highly satisfying as motives are revealed and the hopes and dreams of the money-crazed many are laid bare.

The main characters are well drawn and the author shows he can convey the essence of people in a very telling phrase. The two jihadis in charge of the hostages murder them at will and are well summed up as ‘something that had skipped fifty thousand years of evolution.’ The fact that they speak with Birmingham accents brings home to the reader – and particularly to the British reader – the full horror of their beliefs and actions.