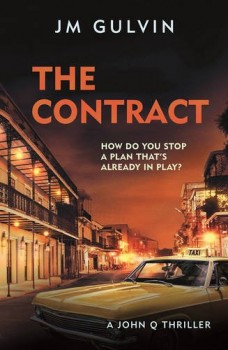 It’s 1967 and Texas Ranger John Quarrie finds evidence of a murder. He follows the trail to New Orleans, where he comes up against a conspiracy at the top levels of society.

John Quarrie, a sergeant with the Texas Rangers, is close at hand when a gun shop is robbed; he gives chase and in a face-off kills one of the two culprits. Shortly after, he finds that the pair spent the previous night in a local hotel, scene of an apparently natural death of another guest. An empty bottle of Proloid pills suggests to Quarrie that there might be more to it.

The drugs came from New Orleans, so Quarrie (John Q to his friends) flies to Louisiana to investigate further. His movements seem to stir up interest: after a brief meeting the pharmacist goes missing, and the woman to whom the drugs were supplied also becomes hard to find. Local law enforcement agencies are quick to warn him off, and there is a taxi driver who mysteriously appears whenever Quarrie needs a ride.

In alternate chapters we are party to dialogue between this taxi driver, Franklin, and Rosslyn F Tobie, a senior representative of an old family with influence in the city. They have some project in view but only the broad outline is evident, along with the date when ‘the contract’ is to be fulfilled: the 28th of the month, only a few days away. The elimination of Quarrie is openly discussed, although deferred for some specific purpose.

These hints transform the story from what is initially a tale of purely local interest to something with international familiarity; murky conspiracies by the most retrograde elements of the old South. New Orleans DA Garrison and his rejection of the findings of the Warren Commission will be familiar to conspiracy theorists; reference is made to Huey Long, and to several better-known political figures, victims of assassins.

John Q’s survival against such well-organised opposition begins to look remote, but the man is not so easily disposed of: he is a fearsome shot with a pistol, intelligent and resourceful, and with a great deal of resilience. He’s definitely ‘old school’ and with some of the ease in his surroundings you see in Elmore Leonard’s heroes. From his ranch near Wichita Falls he has the assistance of his old black Korean War companion Pious as back-up, this connection being substantiated by backstory wherein John Q rescued Pious from an extended prison term by a letter to the president giving testimony challenging an accusation of cowardice.

Quarrie is certainly challenged notwithstanding this assistance. New Orleans DA’s office and law enforcement contain some rotten apples, and it takes some time before John Q learns who he can trust. Practically every move he makes is observed by his foes, and he needs a great deal of luck as well as skill, which makes for plenty of excitement. The sense of time and place propels the story well beyond a simple tale of a Texas Ranger, and the final pages are truly chilling.