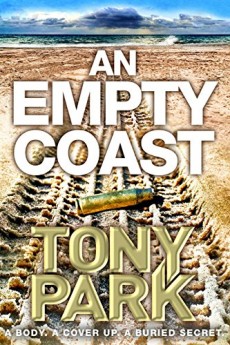 Semi-retired mercenary Sonja Kurtz is on a mission of personal revenge, when her daughter in Namibia sends a call for help. The student archaeologist has discovered a body which sparks a hunt for the location of a treasure that people will kill for.

Since Wilbur Smith in his heyday, no one has written as well about southern Africa than Tony Park. The Army reserve officer, whose action thrillers, unlike those of Smith, are set in the present, divides his time between Sydney and his house on the edge of the Kruger National Park. In doing so, he becomes entrenched with the characters and background – and Africa, with its myriad peoples, endless variety of landscapes, teeming wildlife, beauty and cruelty, itself becomes a major player in the stories.

An Empty Coast is set on the outskirts of Namibia’s lovely, but barren, Etosha National Park, and is a bloody, brutal and captivating tale of a group of archaeologists who uncover a piece of history, and are plunged into a tale of war, corruption and wildlife trafficking. The story, inspired by a real incident, is focussed on the multi-million business of rhino poaching for the alleged medicinal effect of their horns – a reality for many in southern Africa today, with Namibia no stranger to the problem.

Sonja Kurtz, a former soldier and semi-retired mercenary, is in Vietnam on a mission of personal revenge, when her daughter sends a call for help from Namibia. The student archaeologist has discovered a body, dating from the country’s Communist-backed ‘liberation’ war of the 1980s. The body is apparently that of an airman, identified as Hudson Brand, and is a key piece of a puzzle to the location of a modern day treasure – a find people will kill for.

Sonja returns to the country of her birth to find her now missing daughter. So too does a very much alive former CIA man Brand, intent on solving a decades-old mystery. Some of the anecdotes in the book reveal Parks’ deep love and respect for Africa, its wildlife and its people. Rugged, harsh, diamond-rich Namibia has its brutal past as the colony of German South West Africa, its often violent relationship with South Africa and its troubled present relentlessly exposed.

Running parallel to this and in clear contrast is the tale of the life of a desert lion, subtly woven into the story, which in many ways reflects and echoes the lives of the principal characters.

But if the background is brilliant and informed, critical readers will question Parks’ decision to bring back Kurtz as the protagonist. Given her stated record, she must by now be into her 40s. Granted, she can keep fit and her firearms skills polished. But can she really pass as a prostitute at least fifteen years younger? And no veteran I know, and that includes a number of ‘security contractors’, has ever met a female actively engaged in front-line mercenary work!

Forgive an old soldier his gripe and concentrate on this superb, fast moving, if totally improbable story. As always Parks’ knowledge and love of southern Africa – its hot dusty roads, corrupt politicians, petty bureaucrats, the tragedy of AIDS, dangerous animals, gangsters, poachers and arms dealers, balanced by its great beauty and wildlife – paints a picture those who have been there will recognise and those who haven’t will want to visit. These are tough subjects in a tough, thrilling, bloody, brutal and compelling story, but An Empty Coast is another winner which will keep you turning pages.