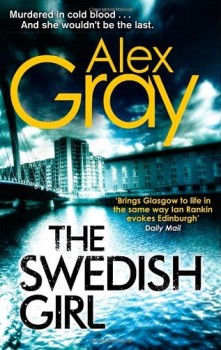 When a student is brutally murdered in a shared house, her flatmates come under suspicion and at first it looks like this will be an open and shut case, but policeman’s daughter, Kirsty Wilson, isn’t so sure.

University student Kirsty Wilson believes she’s really landed on her feet when she gets a place in a luxury Glasgow flat owned by the father of wealthy fellow student Eva Magnussen. But when the Swedish girl of the title is found dead in their home, the idyll quickly turns to dust. Suspicion immediately falls on one of their male flatmates, but Kirsty isn’t convinced, refusing to believe that Colin is capable of murder.

A policeman’s daughter, Kirsty isn’t the sort to take things at face value, and she succeeds in interesting her father’s boss, Detective Superintendent William Lorimer, to take an interest in the case. As ever, Lorimer consults his friend and associate, psychologist Solly Brightman, to take a look at the people involved and see if he can help to untangle the web of complex relationships surrounding the murdered girl and her father the enigmatic Henrik Magnussen.

This is the second of Alex Gray’s Lorimer series that I’ve read, and I was favourably impressed with her previous book, A Pound of Flesh. There the emphasis was on solid police work, but here it’s hard to imagine how anyone ever thinks they’re capable of building a case against the unfortunate Colin, held without bail on the flimsiest of circumstantial evidence. It was also harder to see what Solly Brightman brought to the party on this occasion, although his character insights were much lauded by Lorimer and others, although, to be blunt, he actually seemed to contribute very little to the unraveling of the mystery.

Despite those reservations, the younger cast of characters was engaging enough to sustain my interest, with Kirsty taking centre stage with her refusal to take anything at face value as she exhibits admirable terrier-like tenacity in convincing Lorimer to get involved. The story isn’t overly complicated, but there are some surprises en route, particularly when it becomes clear that Eva isn’t quite the model student that everyone believes her to have been. While this isn’t necessarily Scottish crime at its best, this is still a series worth following.